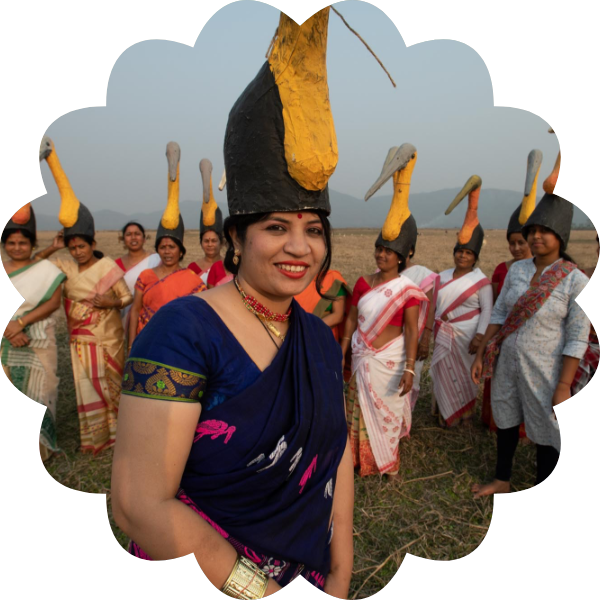 How the stork sister raised an army of 400 women

Led by wildlife biologist Dr Barman, a group of women in Assam are saving the unloved "bone swallower" from extinction | By Gurvinder Singh

Dr Purnima Devi Barman has been trying to solve two problems at once.

She wants to save the greater adjutant stork, a bird from in the Indian state of Assam. She is also trying to use this quest to create employment opportunities for women in the area.

Dr Barman, a wildlife biologist lives in Guwahati, the state capital of Assam and also works with Aaranyak, a leading non-profit working for environment conservation in Assam.

Working to save the bird

For the past 14 years, she has been working tirelessly for the conservation of the greater adjutant stork (Leptoptilos Dubius). Due to rampant poaching and killings, the bird's presence is today restricted to the Indian states of Assam and Bihar and the Southeast Asian country of Cambodia

According to the International Union for Conservation of Nature’s Red List of Threatened Species, only 800 to 1,200 mature birds are left in the world, with the majority of them in Assam.

Dr Barman's work is mostly centred around the three villages of Dadara, Pacharia and Singimari in the Kamrup district of the state. Kamrup plays host to the largest breeding colony of the bird globally thanks to the efforts of Barman and her strong battalion of 400 women.

The women volunteers are called the Hargila army as the bird is also known as Hargila or "bone swallower" because it sometimes consumes whole bones.

The women have been working closely with forest officials to protect the bird and create awareness about it among the local people.

Their collective efforts have borne results and the population of the bird in Assam has more than doubled to 1000. It was a paltry 400 when Barman started her work in 2007. Similarly, the number of bird nests has grown from 80 to 300 during that same period.

Moved by the bird’s plight

The stork is widely considered to be a dirty, smelly scavenger that survives on rotten flesh and dead animals. It is mostly found in dumping grounds and is an unlikely focus for conservationists.

The leggy, five-foot bird has a pink bald head, an abnormal-looking neck pouch and a slow walk that rarely attracts a second glance. It is considered a bad omen and is unwelcome in many households in Assam.

But that didn't stop Dr Barman from developing a close affiliation.

"Since childhood, I had an attraction towards birds as I watched King Vultures and Adjutant Storks feeding on carcasses of cows in the paddy field near to my house and heard numerous tales about them from my grandmother,” she says.

But a real change came in 2007 when she visited Dadara village as a university student researching the world’s largest colony of the species.

“Villagers used to chop the trees having the nests of the bird as it was considered an ill omen mainly due to their lack of knowledge and superstitions involved,” she says.

“One day a villager took me to a tree that had been axed in its branches as it was having some storks. I found to my horror that nine young storks and also some hatchlings had fallen to their deaths. Being the mother of two minor daughters, I realized the true pain that the bird might have undergone after losing her chicks.”

She tried to reason with the tree-feller about the importance of the bird. But she failed. She then realized the imminent threat faced by the bird and decided to dedicate her life to it.

She claims that since 2010—soon after the Hargila army took charge of protecting the storks—not even a single nesting tree has been cut down.

Why women were chosen?

Barman—who is also known as "stork sister"—has a strong and calculated reason for taking women into her fold for the conservation of the bird.

“Women play a dominant role in the society as they act as glue in their families connecting husband and children and their family members," she says. "I felt that they (women) would certainly bring their children to our awareness programmes and that would also inspire their family members to come. In this way, we started working with every member of the household and not just women.”

The Hargila army and villagers also conduct baby showers followed by the serving of cakes whenever baby storks are born.

“The women wear stork masks and sing traditional songs at the baby shower that attracts villagers. Such initiatives have led to massive awareness among the people who try to protect the nestlings of the bird by setting up a protective green mesh under the tree to prevent the nests from falling and facing casualties,” said Protima Rajbongshi, 31, a member of the Hargila army.

Dr Barman has been also training the community women to make different handicraft items by weaving a motif of the adjutant storks on the traditional scarf, cushion covers and sling bag. “I realized that the bird cannot be saved unless it is brought in our culture and traditions and in our daily lives. These handicraft items generate livelihood opportunities for the women who continue to work for the conservation of the bird with much vigour and enthusiasm. It is certainly a way to women empowerment.”

“We have trained over 10,000 women in Hargila conservation who are now imparting knowledge to others while 400 are the active women in the forefront,” says Dr Barman.

In 2017, she won a Whitley award—often referred to as a Green Oscar—for her conservation efforts.