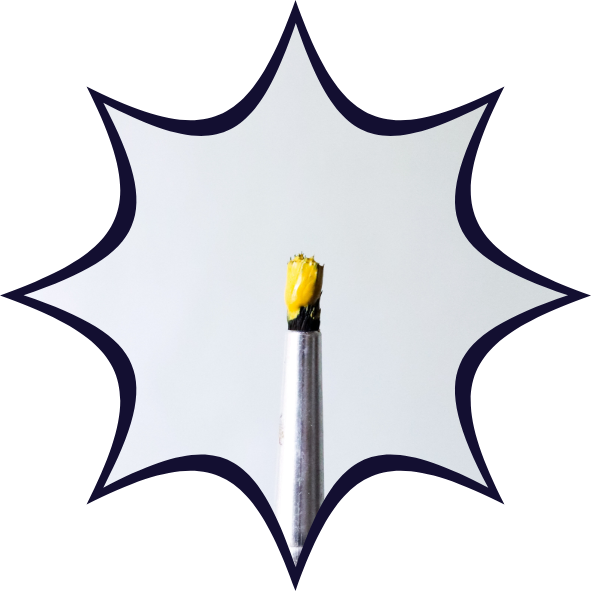 Algae in the walls, pollution in the paint

Water pollution has detrimental effects on our health and our environment, killing many hundreds of thousands of people (if not millions) each year. With its sources ranging from sewage to radioactive waste, fracking to agriculture, there is sadly no one-size-fits-all answer.

Traditionally the domain of scientists and engineers, finding solutions to this massive problem is also being taken up by artists and designers. They not only have the capacity to shape climate communications through their work but can also invent and implement new ways of addressing the problem of water pollution.

From toxicity to beauty

“Most scientists who think about this intersectionality with artists or with creative enterprises, what they want is someone to illustrate what they’re working on. They want someone to draw a polar bear on an iceberg or a tree that fell over,” says artist and environmentalist John Sabraw. “That’s a mode of illustration that art can provide, sure. But that’s not where the real value lies. The real value of artists getting involved in these things is that we are not beholden to the rules of engagement of different professions.”

In 2007 while touring the southeastern part of Ohio with the sustainability group Kanawha, the rich colours of the local streams caught Sabraw’s eye, polluted by free-flowing iron oxide from abandoned coal mines. Partnering with a Professor of Civil Engineering, Guy Riefler, Sabraw extracted toxic mine drainage from the polluted streams, transforming it into a usable and sellable paint pigment.

At the end of the process, the clean water is then returned to the stream. The separated iron oxide pigment is fired at different temperatures in a kiln, creating a range of hues. These are then blended with polymers and resins to make acrylic paint or with drying oils to make oil paint. Revenue from sales of the pigment is then reinvested into the continual remediation of the polluted streams, and so the cycle continues.

Left to dry for several weeks so that the liquid can evaporate, what is left behind is a fluid and unpredictable image expressing both the sublimity and fragility of nature and our relationship to it.

Another project that has adopted this interdisciplinary approach comes from a team of designers and engineers based at University College London. Headed by PhD student, Shneel Malik, the project Indus is a wall designed to be built in areas with contaminated water sources. To help remove heavy metal pollutants from the water source, artisans simply need to pour water over the constructed tiles.

The project was developed from a series of site visits, case studies and interviews conducted with artisans in India, with emphasis on simple, scalable and sustainable solutions. Small-scale artisanal industries often lack the effective infrastructure to solve problems such as water contamination, even though data shows that more than 80% of India’s surface water is polluted.

“The project Indus is a decentralised system,” Malik explains. “The idea is that it was designed to be able to be integrated within the existing environment so that water is able to be treated and reused on site. As an architect I took into consideration their environment, their infrastructure, their daily practices, which often doesn’t happen. Often, you’re sitting in your room fantasising about how people might be creating pollution. Then you create a solution for it and roll it out into the market instead of actually working with the people to understand what it is that is polluting the water. Where is it coming from? Where is it going? How do they interact with it?”

The wall works as a modular system of tiles, inlaid with algae, mimicking the structure of leaves with its vein-like channels. As the water is poured into the system, the algae break down the pollutants through a process of bioremediation.

“We like ideas that are a one-time solution. You get this and it solves everything in the world. But no, solutions need to be contextualised, it needs to be designed. It needs to consider not just the human behaviour but also the environmental impact,” Malik says. “When we think about climate-change solutions, we want a machine that can be mass-produced and distributed on a large scale, but that’s not what nature does. It can be based on the same scientific principle, but it needs to be designed for context. I think that is what I, as an architect, am trying to bring to the engineering world.”

The role of the artist

Artists have long nurtured a close relationship with their natural surroundings. When the artist moves out of the studio and into the real world, that connection with nature can provide a new and influential way of thinking that solves real problems. Painters, architects, filmmakers and poets, to name a few, have long found conceptual ways of communicating the major issues faced by society.

Malik encourages people not to be limited by their discipline, whether that be painting, chemistry or architecture. Both universal and complex, the environmental issues we currently face require collaboration and lateral thinking. An interdisciplinary approach, that uses the mind of the artist amongst others, is needed to ask the right questions and as a result, create the right answers.

Sabraw would agree. “There is something about the melding of the three worlds, art, environment and science, that has people feeling that this is the way we should be solving problems,” he says. “If that’s going to make people think they can help too, that they can get involved and solve these issues by looking at what creative people are doing, then we can spur innovation. Maybe that is what the artist’s role is.”

Photo by Ria Alfana on Unsplash

Taking the fizz out of the atmosphere Migration and climate crises are linked. So are the solutions.
Previous post
Next post