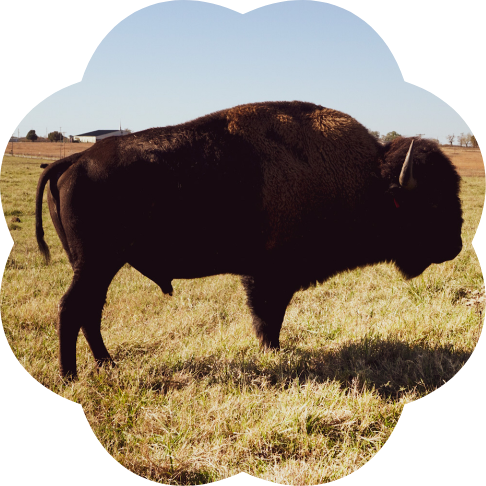 Returning bison to the Quapaw Land | By Brooke Bierhaus

“It depends on who you’re talking to....Tribal members will refer to them as Buffalo since we have a Buffalo clan in Quapaw. The scientific name is Bison.”

We’re in Northeastern Oklahoma, right at the tri-state intersection with Missouri and Kansas. There is a five meter high fence surrounding the 200 acres of grassland where the massive herd of bison roam. Mitch Albright, Director of Agriculture for the Quapaw Nation, looked thoughtfully at the two 400 kg bison staring at us through the fence . “Although our ancestors wouldn’t have called them either of those names. The Quapaw word for buffalo is ‘te’.”

As a Tribal Member and an integral part of Quapaw Cattle Company for over a decade, Albright speaks about the bison in a manner that no one else really can. The connection between honouring the past through the buffalo at Quapaw and the positive impacts that these animals play in combating some of the effects of climate change is what drew me to have this discussion with Albright.

Bison have an important ecological role to play in grassland ecosystems, so interest in restoring them to their old habitat is rapidly gaining momentum. We discuss regenerative agriculture, a system of farming principles and practices that increases biodiversity, enriches soils, improves watersheds, and enhances ecosystem services. It is not a new phenomenon. Ancestral knowledge is deeply rooted in regenerative agriculture principles across the globe.

In this particular instance, the O-Gah-Pah (Quapaw) people’s ancestors used the naturally regenerative grazing practices of Buffalo to keep soil fertile for crops. Before Europeans arrived on the eastern shores, an estimated 30 million bison roamed the Great Plains of central North America. However, in the late 1800s these bison were almost entirely driven to extinction with less than 1,000 individual animals remaining. The Quapaw people too, were forced to migrate and relocate to land that was determined by the government.

“Truthfully, it makes me sad.” Grace Goodeagle, an esteemed O-Gah-Pah elder and former chairman of the Quapaw Nation, explained her emotions when seeing bison roaming the fields at Quapaw.  “The buffalo are us...we are the buffalo. They have withstood the near extinction of their species. I feel their sadness.” Her eyes stayed fixated on me behind her wire framed eyeglasses as she continued, “But I do also feel hope. Hope for the future of the buffalo and our people.”

The deep rooted ancestral trauma from colonization remains a part of many Native Americans' lives. The connection between the buffalo and the O-Gah-Pah people is apparent even on the surface level – the seal for Quapaw Nation has the image of the buffalo in the middle.

“Back when Buffalo roamed, so did the Indian,” explained the newly elected Chairman of Quapaw Nation, Joseph Tali Byrd. “We look at them as our relatives. We have a very symbiotic relationship with the Buffalo.” Chairman Byrd paused for a thoughtful moment before continuing, “We see their resilience as our resilience.”

Roaming and grazing once again

Fortunately over the decades, conservation efforts have led to a rebound in the population of North America’s largest mammal; a recorded 350,000 bison roam today. In an effort to reintroduce the mammals back to land owned by Native American tribes, the InterTribal Buffalo Council, created in 1992, works with the National Park Service to relocate bison to tribes. Quapaw Nation is a part of the InterTribal Buffalo Council, and have reintroduced Bison from the National Parks to their herd since 2010.

Albright motioned towards the buffalo grazing a mere ten meters away from us, “They are more efficient grazers than cattle, and don’t destroy the grass.”

Most of Quapaw land sits on Tar Creek Superfund site, former home to lead and zinc mining. The chat piles left behind have contaminated groundwater, pond, river and soil, and have caused many health problems for local residents. Quapaw has used a clean-up grant from the Environmental Protection Agency to form the Quapaw Services Authority (QSA), a tribal authority to oversee site restoration.

Bison have been playing an important role in the restoration of the land. In the 200 acre ranch located next to the Quapaw Downstream Casino Resort, the Bison are continuing to naturally digest nutrients to fertilize the soil, sequester carbon, graze efficiently, and ultimately combat climate change. A unique component to the regenerative grazing practices of bison is that they distinguish wildflowers from grass and will not eat the wildflowers in the prairies. Unlike cattle which consume all of the grass and wildflowers on prairie land, the bison eat only grass.  Overgrazing from cattle has led to many Midwestern states having critically endangered ecosystems. It might seem simple, but by leaving the wildflowers, bison are allowing for the better distribution of nutrients in the soil.

“They’re natural conservationists on their own. That undergrowth in the fields that you want to keep year round, they leave it there because they don’t overgraze, there’s enough room for them to have their space...we don’t overpopulate areas and we just let nature take its course. We might scatter chicken litter or an organic fertilizer if nitrogen is needed after results from a soil test, but that’s about it. It’s all natural.”

Protecting the land for future generations

In 2017, the Quapaw Tribe re-established a long-lost connection between their animals and the fuel costs and emissions being used to travel for meat processing. The tribe was serving locally raised beef and bison in the casino, but were shipping to Colorado for processing, then to Kansas City for dry aging, and finally back to Northeast Oklahoma. All of those driving miles contributed to tons of carbon dioxide emissions, all for the meat just to be eaten a few kilometers down the road from where it was raised. To solve this issue, Quapaw opened the first tribally-owned and operated cattle processing plant in the United States. Today it is still the only USDA certified meat processing facility on tribal lands. An impressive and important component to Quapaw Nation’s vision of complete food sovereignty.

In the passenger seat of Albright’s white pick-up truck I could see a dozen bison standing near the middle of the field.

“The field is still a bit wet from last week’s rain, but we shouldn’t have a problem.” He assured me over his shoulder. I don’t anticipate us having any problem as I assessed his familiarity with the terrain. We head towards the herd, and the size of each bison magnifies with every passing moment. I ask Albright whether Bison are aggressive by nature, and he laughs a little before stating, “The only ones you really need to watch out for are the female buffalo when they have their calves with them.”

A few moments later and we spot a female bison with her calf in-towe. We drove just close enough to get a look at the calf, but not so close as to threaten the mother. I noticed the grass looked greener in this area than other areas of Quapaw. This surprised me, so I asked Albright if soil tests have shown any improvements to the land since reintroducing the Bison.

“It can take 500 years for an inch of new topsoil to be produced. That being said, the Buffalo are making a difference to our fields for sure.” I watched his eyes gaze past the fence line.

“At the end of the day if there’s a way that we can improve our lands and protect it for future generations, we’re going to try it.”

Writer's note: *This piece was made possible by the Quapaw Nation of Oklahoma, the Quapaw Cattle Company, and the Quapaw Communications Department.