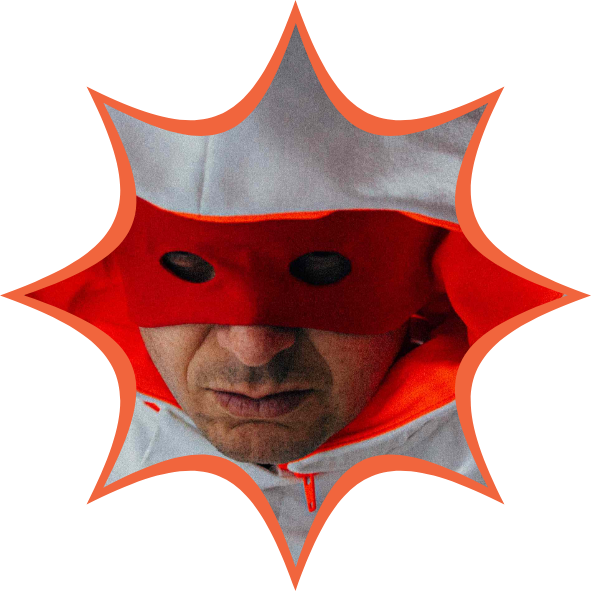 Buttman is cleaning up the streets

Not all heroes wear capes. Some pick up cigarette butts | By Kim Thomson

A caped crusader roams the streets of Melbourne, Australia, cleaning up a scourge on the city. His name? Buttman. His mission? To rid the world of cigarette waste.

While he doesn’t dress in a black cape and tights—no, he favours white and orange —Buttman has been cleaning up his home city since August 2019.

It’s no easy task: cigarette butts are the most littered item in the world. An estimated 4.5 trillion are tossed every year. Made of cellulose acetate, a form of plastic, they can take over 10 years to decompose.

A hero is born

The man behind the persona is Richard Squires, a massage therapist by day.

Squires says he has long been environmentally conscious but reached a tipping point a few years ago. Travelling the globe to work at elite sporting events, he started to notice a common denominator.

“I was looking around all these different environments and everywhere I went, there was rubbish,” Squires says from his home in Melbourne.

Back in Australia, he couldn’t ignore it either.

“I came back to work at my clinic and there was a lot of construction going on [nearby],” he says.

“A lot of the tradesmen in the construction industry, for whatever reason—whether it's culture or a lawlessness … or lack of sense of place—they just throw all of their food and wrappers and cigarette butts and everything on the ground.”

He noticed a mass of rubbish—including cigarette butts—ending up near a stormwater drain.

“I couldn’t believe it. I had this heightened sensitivity to plastic pollution.”

Transfixed by the problem, he began picking up butts—easily gathering 400 a day. To get other people to pay attention, Squires assumed his alter-ego.

When out collecting as Buttman, he often strikes up conversations about cigarette waste. Many people are surprised by the scale of the problem. Not only are butts the most commonly littered item—they are also highly toxic to the environment.

The butt of the issue

The cigarette filter got its start in the 1950s, when tobacco companies presented them as a “healthier” alternative to existing non-filtered cigarettes—a claim which has since come under scrutiny.

The World Health Organisation estimates over 340 and 680 million kilograms of cigarette waste ends up in the environment each year. As well as the sheer size of this plastic-based waste, filters—when smoked—can contain around 7000 chemicals, including nicotine, cadmium, lead and arsenic.

As the butt decomposes, these chemicals leak into the surrounding environment, which can prove severely toxic to aquatic life. One study showed that placing a smoked butt in a litre of water killed half the exposed fish. Another found that butts can severely inhibit plant growth.

Squires says that because a cigarette filter is small and doesn’t feel like plastic, many people don’t realise the full consequences of tossing one away.

“It makes people believe that it's insignificant,” he says.

It’s also easy to get away with: “I've noticed that this action can only occur in the darkness. Now, that sounds mysterious. But if someone's not witnessed [littering their butt], they forget about it much quicker. If they're witnessed, they know it's wrong.”

He stresses his project is not about shaming smokers—he smoked for ten years—instead, his approach is empathetic.

“I never go and collect if I'm in a bad mood. If I'm worried about something like Trump leaving the Paris Agreement, or the statistics I'm seeing with global warming, or some kind of tumultuous moment in my life, I won't go out and collect.”

“It's always [based on] love and compassion and understanding … I'm not going to change anyone's behaviour with a hard whack."

As well as on-the-ground conversations, he incorporates a range of outreach strategies. The Instagram hashtag #WorldButtCount encourages everyone to tally the butts they collect in their local area. He also distributes pocket ashtrays to venues and individual smokers.

Ultimately, Squires says he wants to see a multi-pronged solution, one that includes more awareness campaigns and action by local authorities, as well as the onus being shifted to tobacco companies to foot the clean-up bill.

Buttman isn’t the only one tackling cigarette waste, of course. There are a host of creative solutions around the world.

But for large-scale change, legislating extended producer responsibility (getting cigarette companies to clean up after themselves) will be crucial. The tobacco industry is a tough opponent—but the needle is starting to move.

The European Union’s 2019 Single-Use Plastics Directive stopped short of banning plastic cigarette filters, but it will force tobacco companies in member states to pay for labelling that raises awareness about plastic. It will also make them cover clean-up, collection and treatment costs by 2023. If implemented properly, this could have a big impact.

As for Buttman’s growing butt collection? He’s hoping to team up with practitioners who are developing processes to break them all down with mushroom mycelium—potentially creating a useable material.

Squires says this circular approach is key: “Looking at the full lifecycle of the cigarette—that’s where we’re going.”

Other images provided by Buttman himself.