About Stories Guides Contact Donate Write for usContact
Algae in the walls, pollution in the paintWhat is a flexitarian diet? 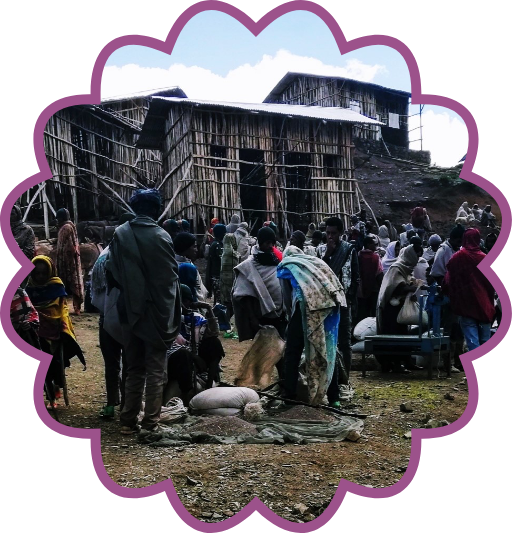 Migration and climate crises are linked. So are the solutions.

The consequences of global warming are forcing millions of people across the planet to consider leaving their homes. According to the United Nations (UN), up to one billion people worldwide could be displaced by 2050 because of the climate crisis.

This climate-fuelled exodus has already begun.

Ethiopia is one of the most drought-prone countries in the world. In 2018, drought, along with floods, displaced almost 300,000 Ethiopians.

Because of erratic rainfall patterns and consequent water shortages, Sub-Saharan Africa could generate up to 86 million internal climate migrants by 2050. Ethiopia is the most climate-sensitive country in the region as it relies heavily on rain-fed agriculture. The continued predicted growth of the Ethiopian population (up to 85 percent by 2050) will place further stress on the country.

However, over the last decade, actions have been taken to reduce the country's vulnerability and attenuate the climate-induced migration wave—especially in the Amhara regional state.

An unspoiled highland stronghold in the North

Only by going through the small kebeles (neighbourhoods) of Lalibela, can one truly appreciate the ancestral atmosphere of the Amhara regional state. The 11 medieval rock-hewn churches found in this gem of a town are miles away from the globalised hubbub that subsumes much of the planet. Perhaps it is the pollution-free sky on top of the hill overlooking Lalibela valley. Or maybe it is the lack of plastic along the green hiking trail leading to Abuna Yosef—the highest peak in the North Wollo zone, at an elevation of 4,260 metres—where one can hear nothing but the screeching of the Gelada monkeys.

Here, the women of the mountainous communities still prepare Jebena buna, a traditional slow-coffee. The Amhara is one of the areas where the famous Arabica coffee is produced. Despite the decline in coffee harvest over the past decades, some climate models predict that global warming will improve the coffee-producing suitability of this high altitude region. By hosting incoming farmers in the future, the Amhara could play a pivotal role in the resilience of the Ethiopian coffee industry.

Travelling 100 miles to the southeast, a mostly downhill journey, one begins to see a different scenario unfolding. While still within the North Wollo zone, the vegetation in the highlands gives way to the degraded soil of the Habru woreda (district).

“This particular district has a high number of people who have migrated abroad due to the deteriorating condition of their farms, but returned to the area and continue to struggle to survive.” Lisa Lim Ah Ken, from the Migration Environment and Climate Change Division (MECC), explained. “Climate change and intensive land-use caused soil erosion and significantly reduced its fertility. Over-population resulted in smaller agricultural plots per family, that made it difficult to gain a living from.”

In 2019, a community-based approach, known as “Integrated Sustainable Reintegration Assistance Project for Ethiopian Migrant Returnees in Amhara Region” was jointly launched here by the European Union (EU) and the International Organization for Migration (IOM).

The project aimed to create suitable living conditions for returning Ethiopians (mostly from Yemen and the Middle East). Local community members and returnees together developed watersheds (basins) and learnt about smarter water harvesting (i.e. diverting the water runoff into pans to be used throughout the drier months). Fruit tree nurseries were also set up to generate an income (seeds and fruit sales, tree cultivation) for the migrants in the coming years.

“The rehabilitation of agricultural land helps the reintegration process as returnees become absorbed into the community through the project, and it gives ‘would-be migrants’ an option to not migrate out of desperation, but to stay and rebuild their livelihoods”, Lisa said.

The total project only cost 50,000 euros. A small cost to plant the seeds of a better future for many returning migrants.

Just another 60 miles southward, after entering the South Wollo zone, you reach the Kalu district, a degraded, drought-stricken, and chronically food-insecure area.

Here, another battle against climate-driven migration has been fought after water scarcity had displaced many people over the years. To stifle the exodus, local people were brought together to stand against the common enemy.

A collaboration between the UN Development Programme (UNDP) and the Global Environment Facility (GEF) gave rise to the Coping with Drought & Climate Change (CwDCC) project in 2010, which was implemented in four African countries (Ethiopia, Kenya, Mozambique and Zimbabwe).

One of the key elements of this project was to promote experiences exchange between communities and across different countries to allow participants to brainstorm and learn from each other. From a technical standpoint, a range of strategies was developed, such as providing farmers with improved seeds and introducing early warning systems for the prediction of the rainfall patterns.

After spending less than a million dollars between 2010 and 2013, this initiative led to positive outcomes. For instance, the average productivity of the grass-type teff—an Ethiopian staple threatened by biopiracy—has increased more than 46%.

“I suffered a lot during drought times for the last half-century," one beneficiary, Mohamed Hassen said. "Thanks to the CwDCC project, I am dreaming [of a] better life to my family... The improved teff seeds are [allowing me to] dream [of] much more income.”

Migrating the Ethiopian model to the rest of the world

Migration and climate crises are often two sides of the same coin, and the Ethiopia case study calls for a paradigm shift in dealing with this conundrum. Investing in concrete solutions upstream, where migration stems from, is more cost-effective than applying often politically fraught and expensive measures downstream, in whichever country climate refugees end up in. After all, European countries spend up to €500 each month per asylum seeker, which is roughly three times the cost of restoring a hectare of land in Niger.

All images by Sandra Pinedo. She is a freelance photographer and storyteller who specialises in social issues. You can see more of her work on her Instagram and website.