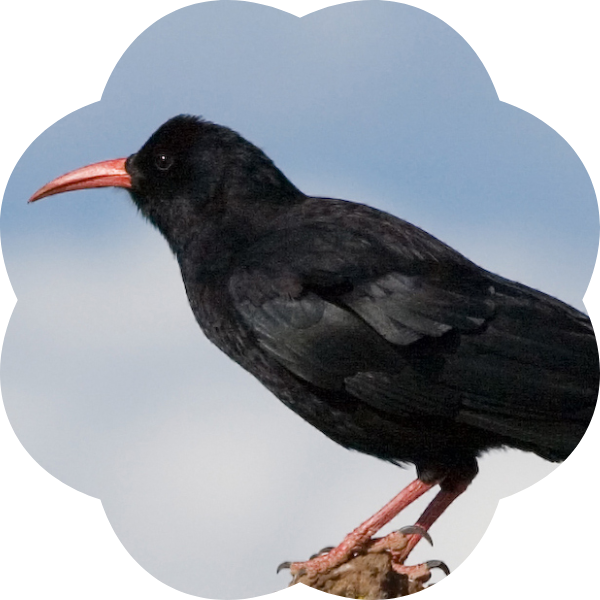 The return of the Cornish chough

Cornwall is a gem in the crown of the British coastline, tenaciously jutting out into the Atlantic. It is scattered with white beaches, turquoise waters and rugged cliffs swarming with wildlife. A much-loved holiday destination, the tourism industry is a large part of what keeps the county's economy alive. However, with the slow tick of time, traditional Cornish culture has been dying.

There’s a steady flow of rich outsiders buying second homes, making it impossible for young Cornish folk to get on the property ladder. The fishing industry is faltering, the Cornish language went extinct as a first language in the late 18th century and is now only spoken fluently by 500 people, and an adored symbol of Cornish culture disappeared from the cliff sides in 1973 after a long population decline.

Cornish choughs (pronounced “chuffs”) are small black birds with characteristic curved orange-red beaks and feet. They represent home to the Cornish, and are included on the county coat of arms; legend has it that King Arthur himself was transformed into a chough when he died. They were once commonly seen around the Lizard, Britain’s most southerly point.

Sheep, cattle and ponies traditionally grazed the grasslands on the cliffs, creating a mosaic of open, short grasslands where the choughs could easily forage for bugs and grubs. The chough population declined throughout the 19th and 20th centuries for a variety of reasons, including trophy hunting and the gradual degradation of their preferred habitat. Over the years, livestock was moved to pastures further inland where they could be more easily managed, so the cliffs quickly became overgrown with scrub and bracken. All this meant the choughs found it increasingly harder to feed. When the last chough died in the 1970s, Cornwall collectively mourned the loss of their national bird.

Birds of a feather

One fateful day in 2001, a small group of choughs miraculously returned to the Lizard, having crossed the Irish Sea. One nesting pair chose to settle and had their first three chicks in 2002.

I spoke to Paul St Pierre, a Conservation Officer for the RSPB (Royal Society for the Protection of Birds), about why the choughs re-settled on the Lizard again.

“Birds naturally disperse as young are pushed out of their territory by parents. This is important in ecology, as dispersal allows the exploitation of new beneficial areas. The Lizard happened to be suitable for choughs again since work had been done in managing grazing, so when the choughs found themselves in Cornwall again, they returned to find the right habitat waiting for them”.

Since 2001, the chough population on the Lizard has increased to over 100 birds thanks to the tireless rewilding efforts of the RSPB's Cornwall Chough Project, in partnership with the National Trust, English Nature, and the Cornwall Birdwatching and Preservation Society (CBWPS).

Rewilding is the restoration of ecosystems so that native species can sustain themselves once again. In this case, encouraging natural grazing around the cliffs creates the ideal conditions for the choughs to settle and thrive on the Lizard once more.

A group of volunteers are involved in the Cornwall Chough Project, who report sightings and monitor productivity (how many young the choughs are having). Productivity is a good indicator of how well the choughs are doing, as they won’t produce as many chicks if they don’t have enough food to sustain them. The CBWPS are responsible for managing a database tracking chough sightings, which ensures we have a good understanding of how the population is changing.

Volunteers monitor nest sites and work with farmers and landowners, giving advice on chough management and monitoring, and encouraging them to get involved in government schemes called Environmental Land Management schemes (ELMs). ELMs pay the farmers to maintain good habitats for various endangered species, which are incredibly important for maintaining biodiversity throughout the UK. The schemes are currently coming up for renewal, so the Cornwall Chough Project has been lobbying for choughs to stay a target species included under ELM protection.

Paul is excited about the future prospects of the chough.

“The population is doing really well. They’ve gone from one breeding pair in 2001 to 24 pairs, and have produced 43 young, taking us to over 100 birds. They’re being well supported by local communities, farmers and landowners. Here’s hoping that in the future we’ll be able to see chough anywhere on the coast path across Cornwall!”

Out on the sea-scoured cliffs, the choughs are reclaiming their home with the help of the community who refused to let them fade into the annals of history. Amid the dilution of the passionate Cornish culture and loss of countless significant species across the world, Cornwall has reclaimed its symbol and its heart.

If you’re ever in Cornwall and happen to spot any choughs on your walks, please email choughs@cbwps.org.uk and let them know the date, place, 6 figure grid reference if possible, and notes of any colour rings observed. More information about the Cornwall Chough Project and the history of the Chough can be found on the RSPB’s project page.