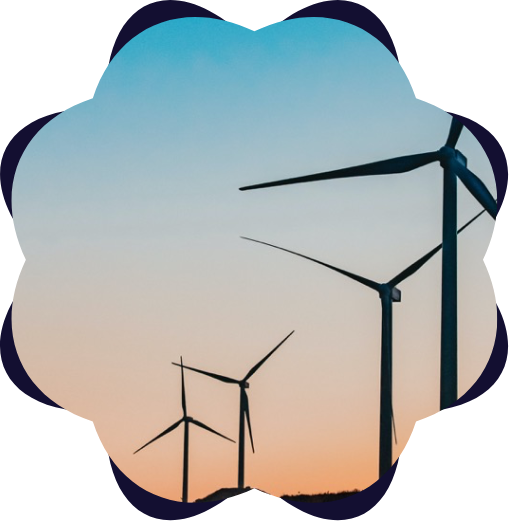 Let’s take a moment to talk about onshore wind. When it comes to clean energy, wind turbines located inland have huge potential. They’re incredibly cheap (in fact, they’re the cheapest source of electricity generation), have a huge amount of support across the UK and can even help local communities. For example, as the Covid crisis hit, onshore wind projects in Scotland provided emergency support and funding to families.

Historically, our perception of wind turbines springing up across the rolling countryside has been mixed, to say the least. But where they may once have been understood as little more than eyesores, now we know how vital they are in taking us towards our clean energy future as 77% of us now welcome onshore wind.

As director of Power for People, a not-for-profit organisation campaigning for the UK to rapidly transition to 100% clean energy, Steve Shaw has seen this play out. He explains, “It’s those who shout the loudest that really do influence the most. We’ve got a quiet majority of supporters at the moment but have seen a very loud, very small, group of opposition. That’s created an impression of negative opinion.”

We know onshore wind is a powerful source of green energy, and we’ve seen how it can work for communities too - nowhere is this more clear than in Orkney. Scotland is the windiest country in Europe but, as Dr Laura Watts says in Energy at the End of the World (The MIT Press, 2018), “Wind power is something else in Orkney.”

Dr Watts explains that in Scotland, “the islands have been a test site for sustainable energy generation for more than half a century.” Among many firsts, Orkney installed Scotland’s first community wind turbine way back in 2005 and there are now hundreds of locally owned micro turbines on the archipelago. Production is also impressive, the islands regularly generate more renewable energy than they need and as a result, they have created new electric cars and hydrogen fuel networks to use up the excess electricity.

Focusing solutions on the local level

But, as anywhere, the path towards clean energy hasn’t always been smooth with communities split over whether to embrace the turbines. The key, as Dr Watts sees it, is that “those who resist and question are as much part of the Orkney electron as those who are advocates; interaction is what matters.” Vitally, community projects work for locals. “The revenue from locally owned wind turbines goes back into the community to support and grow community resources, tackle fuel poverty, and keep people living on the islands.”

"The journey from opposition, or apathy, to support may seem difficult, but it can be done."

In England, it’s policy, not passion, that holds the country back from achieving similar results. Though a five year block on funding onshore wind via contracts for difference was lifted earlier this year, Alethea Warrington, a campaigner for the climate charity Possible, explains that other obstacles still remain in place. “At the moment, onshore wind is being prevented by planning blocks from fulfilling its potential to cut emissions and support communities.” These planning regulations essentially mean any community opposition, no matter how small, has the potential to halt even the biggest projects and investors are hard to come by.

Change needs to be made at a policy level, but, as Alethea says, “given the increased concern about climate change and the government’s positive policy decision earlier this year, now is the perfect moment to unblock the potential of onshore wind.”

Passionate people are vital in securing that change. The journey from opposition, or apathy, to support may seem difficult, but it can be done. Steve Shaw talks of one of Power for People’s supporters, Jill, and how she worked tirelessly to change the mind of her local MP. “He was very sceptical, but with her very persistent, polite and strong lobbying as a constituent over the years, she brought him round to seeing climate change as a real problem and one on which he needed to take action. That’s quite a shift and it’s down to her.”

The most straightforward way to take action, and the one which garners the best chance of workable change, for Steve, is reaching out to policymakers. “The most important and valuable thing any individual can do is,” he says, “to write to their MP, to visit their MP, to make their support for onshore wind known. Our MPs work for us, but it’s them who can push the Government to make the changes.”

Alethea absolutely agrees and saw the difference this type of campaigning made in removing some blocks earlier this year. She says, “People pressure is really important for wind. The government needs to know that people like onshore wind and want to see more projects, including in their local area.”

What can you do?

People power can really bring about positive change. That might be on a personal level, by using websites such as bigcleanswitch.org to make sure you’re on a renewables-only electricity tariff, a local level, by supporting a nearby community energy group, or on a political one, by reaching out to your MP to have your opinion on onshore wind heard.

We still have a long way to go for 100% clean energy - in the UK, only about 8% of our energy today comes from renewables - but onshore wind offers a huge opportunity to increase that figure.

Photo by Zhang Fengsheng on Unsplash