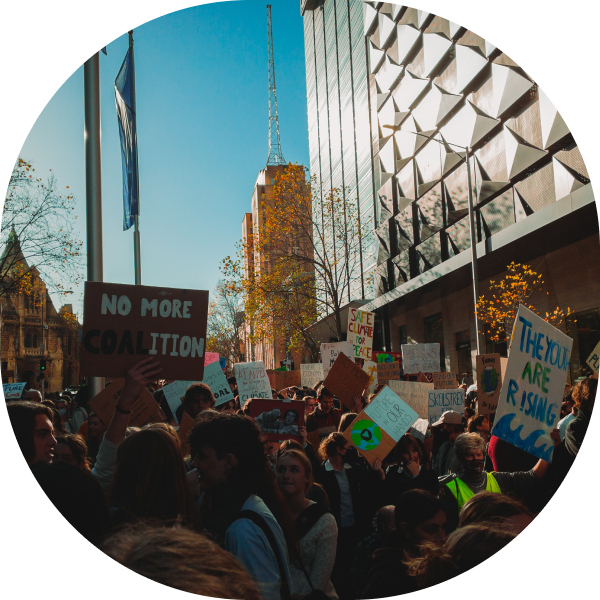 Is climate activism a coping strategy?

Dr Aaron Thierry is a researcher at Cardiff University with a background in ecology. He was speaking with a volunteer firefighter in Canada during the recent forest fires. “He was explaining how he hadn’t seen his family all summer.”

It wasn’t just the wildfires hitting the community there: “All the things he would normally be doing, like fishing, were impossible to do because normally they go onto the frozen lakes and drill a hole, but it’s getting too dangerous because the ice isn’t thick enough.”

This conversation had a lasting impact on Dr Thierry: “I remember feeling really upset by it because it’s a whole way of life, a whole culture that was having to radically adapt. I also felt like this is the future for all of us – it is unsettling.”

Thierry also explains how because of thawing permafrost, trees grow in unusual ways: “The trees are losing their footing and are starting to topple over, but they’re still trying to grow up towards the light, so they’re growing all wonky. They call it drunk forests. It’s a bit like an Alice in Wonderland environment – you can’t walk in any straight line. It’s very surreal – it feels like a bad dream.”

For him, it is these experiences that reinforce the reality of climate change, but it gets “really hard” to come back to normal life as Thierry finds “everyone just seems to be carrying on as usual.”

“It’s a really difficult set of emotions to deal with in the sense that everything seems to be a little bit mad. The more you understand about the rapid change that needs to happen and the longer you go on without seeing it, that starts to become anxiety-inducing.”

With an understanding of the impacts of global warming comes a myriad of different emotions. Not only anxiety and anger but also hope and courage. Thierry thinks one reason for these feelings is because climate change “challenges some of our key fundamental beliefs about the world and the future - are governments acting in responsible ways?”

There are many different ways to cope with these emotions – and activism is a popular and well-known method.

However, activism can be a coping strategy that does more harm to the activist than good.

Thierry explains: “A lot of people use action as a way of keeping things at bay and to avoid sitting with these feelings.”

“This can lead to burnout because it’s not a sustainable, measured response. It is something that you’re frantically doing because you’re terrified of having to confront the emotions.”

He suggests that people need to come to terms with what they’re feeling and then decide what they want to do about it.

“The reality is that for the majority of people is that there is a kind of grief where we have to come to terms with a new reality and let go of some of our previous understandings and hopes. In the same way, you lose a loved one, and you have to let go of that future you hoped to have with them; we have to let go of a certain future we had for ourselves.”

The opposite of the frantic fear that leads to burnout is having a seemingly irrational amount of positivity: “One of the ways that we deny the need to take action is by having a naïve hope. Some scientists will invent a technology to take out the CO2 from the sky. The government will fix this when it gets too bad.”

“One of the ways we cope is to come up with a fantasy to say it’s all going to be okay. This hope is very counterproductive. It doesn’t help us – it stops us from taking the actions needed.”

When Thierry moved from academia towards activism, he started working as a coach for younger environmental activists. He says they have many intense emotions – “there is a strong sense of abandonment,” but they find it easier to talk about how they feel.

Older activists however grew up with a stigma around talking about mental health. Along with this, they have a more robust culture of denial because: “They’ve grown up with a different world view, so the reality is more painful and difficult. The choices they’ve made throughout their lives and the legacy they’re leaving behind is damaging – that is not something people want to confront – it’s traumatic. So, I think some understanding and empathy is needed towards the older generation to help them.”

“We also need to show a path for older generations to make amends. Starting from a position of blame is really not going to help.”

While climate change forces many difficult-to-process emotions to the surface, Thierry believes this is positive because it shows that we care – that we’re invested in a better future. Activism can provide a space to confront emotions as a community, and this is far healthier than suffering alone.

“The best thing we can do is to have conversations about this because that’s where a lot of change comes from,” concludes Thierry.

Photo by Sam Ladley on Unsplash