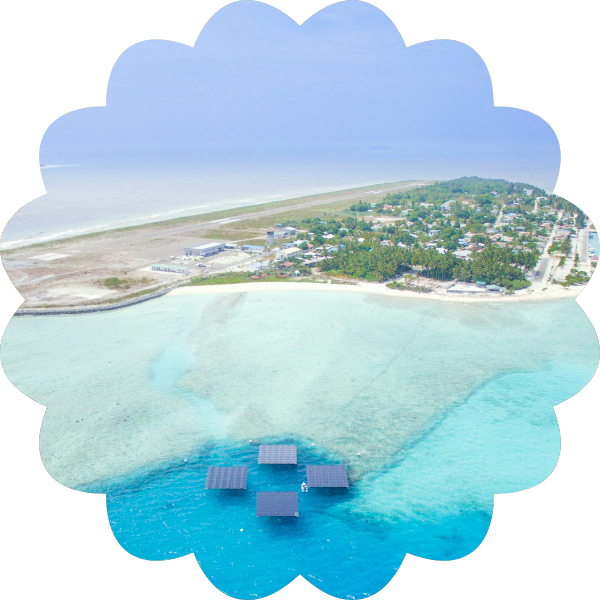 In much of the world, there’s no shortage of sunshine, just a lack of rooftops and vacant land on which electricity-producing solar arrays can be installed.

As part of their efforts to cut greenhouse-gas emissions and reduce their dependence on energy imports, several densely populated Asian countries have established hundreds of floating photovoltaic (FPV) power stations on lakes, ponds and fish farms.

The 34,013-panel system at Agongdian Reservoir, which is one of the largest FPV projects in Taiwan, has been supplying that country’s grid since 2017. The following year, a 50,904-panel, 13.7 megawatt FPV plant was inaugurated at Yamakura Dam in Japan. Both are dwarfed by newer FPV stations in China and India.

Attaching solar panels to a raft while ensuring that nothing in the setup compromises water-quality standards isn’t the only challenge engineers have had to tackle. Even on placid bodies of water, moorings for floating photovoltaic systems require careful design, to take into account fluctuating water levels and strong winds. In 2019, a typhoon pulled apart one of the arrays at Yamakura Dam. After some panels became entangled, they overheated and caught fire.

In regions where extreme weather events are frequent, there’s an interest in FPV systems that are capable of submerging, then resurfacing once the storm has passed.

FPV systems are on average 10% to 12% more expensive than land or rooftop PV systems. Recognizing this, some countries like Taiwan offer a special feed-in tariff (FIT, a promise by the government to buy electricity at a premium price, typically for up to 20 years, to incentivize installation).

In warmer locations, floating photovoltaic has at least two advantages over systems on dry land. Because water reflects some of the sun’s rays, panels on reservoirs or lakes benefit from additional diffuse irradiation. Additionally, the problem of PV panels becoming less efficient in high temperatures is mitigated by the cooling effect of the body of water. Together, these two factors can boost performance by as much as 10%.

By reducing evaporation, large-scale FPV systems on reservoirs should also help conserve freshwater. They may also inhibit the growth of algae, which is good for water quality, though this might reduce the amount of food available for certain insects and fish. They may also interfere with the habits of fish-eating bird species.

According to Vicky Lin—a project coordinator at Blue21, a Dutch company involved in various floating urban projects—finding ways to tap the massive potential for offshore solar power generation could lead to huge growth in the FPV industry.

Progress in this area could also be a game-changer for small island states. As Martin Putschek, managing director of Swimsol GmbH, points out, countries like Comoros, Maldives, and Timor-Leste, struggle with access to electricity. Their grids are typically powered by diesel, which is both expensive and highly polluting.

Because such islands lack the roof or land space to install a meaningful amount of PV capacity, Vienna-based Swimsol has since 2014 been creating technologies that allow solar arrays to be installed on the surface of the ocean.

Designed to withstand challenging conditions at sea, including salinity and destructive waves, Swimsol’s technology is modular and thus can be tailored to meet the needs of tiny island communities or of much larger settlements.

“Our floating structures are shipped so they can be assembled and deployed on the beach, without the need for heavy equipment or machinery. We believe this will be the way forward for tropical islands to become sustainable and have access to renewable energy, and we hope that we’ll continue to play a role in this shift,” says Putschek.

A consortium led by Netherlands-based Solliance has been testing a system that mounts flexible thin-film solar cells on flexible floats. The capacity of the former to bend without damage should increase the longevity of FPV systems in places where the waters are seldom calm.

Two of the biggest floating photovoltaic projects under development in East Asia are on seawater, but in sheltered locations. On Taiwan’s west coast, the 320-megawatt Changbin-Lunwei solar power station is taking shape in a cove. South Korea’s Saemangeum Project will eventually include 2.7 gigawatts of FPV (plus another 300 megawatts from wind turbines) behind the world’s longest seawall.

Just as near-shore wind turbines have become a common sight in many parts of the world, in a decade or two, countries like Maldives may be ringed by—and possibly entirely powered by—photovoltaic archipelagos.