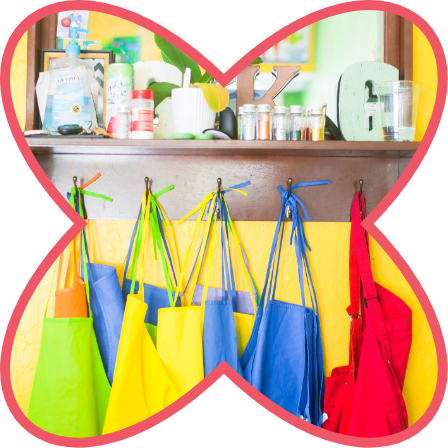 In India, schools are about more than formal education. On top of spelling and arithmetic, students often learn about health and the environment. India even runs the world’s largest school lunch program to address malnutrition among children. Today, in some pockets of the country, educators and nonprofits are experimenting with innovative ways to teach children about the harmful effects of plastic.

Weighed down by waste

India’s plastic waste problem is ginormous. The country generates 26,000 tonnes of plastic waste every day. In poorer parts of the nation, people burn plastic to stay warm during the winters. This is especially pronounced in Pamohi, in the northeastern state of Assam, at the foothills of the Himalayas where winters are harsh.

There, a small school came up with a brilliant idea.

"The school decided to ask its students to bring in 25 pieces of plastic every week."

“When we spoke to the students we found out that they have been burning plastic every day especially in winter months,” says Parmita Sarma, who co-founded the free Akshar foundation school with her husband.

The school decided to ask its students to bring in 25 pieces of plastic every week. At first, the parents and children resisted the idea because they did not want to sift through the trash and segregate the plastic waste. In India, trash is rarely segregated for recycling at source. Instead, waste workers separate it after collection.

But Akshar’s collection drive was failing because no one was bringing in enough plastic.

“We then told the parents that if they don’t send the plastic, they will have to pay a tuition fee,” Sarma says. “Now they send over 25 pieces every week. It also initiated them to the concept of segregating their waste.”

Like Akshar, the Padampani school in Bodh Gaya in the eastern Indian state of Bihar also caters to underprivileged students—mostly the children of day wage labourers.

When they introduced the 'plastic for fees' programs, there was also resistance from the parents. “We don’t want them to pick up trash.” However, once the school administration made it clear that it was a choice between separating the plastic or paying a monthly tuition fee—they acquiesced.

"We used to burn plastic for cooking purposes but as soon as I realised the harm we were doing to our Mother Nature, I made my family stop right away." - Gyandeep Rangsal

The school sells off the collected plastic at the end of the month as scrap and uses the money to buy saplings that they plant in and around the school as well as elsewhere in the village. Plastic is recycled and natural carbon captors are planted. Some of the reusable plastic bottles are even used by children as planters.

The students have now planted over 2,000 saplings. Today, the unpaved road leading up to the school is garbage-free and lined with trees. The children water the trees on their way to school—5,000 are expected to be planted by 2021.

Back in Pamohi, the Akshar school uses the plastic it collects from students to make eco bricks. “We have built one wall of a toilet with it and also several smaller structures within the school premises,” says Akansha Duarah, one of the teachers.

Gyandeep Rangsal, a student of class 8 in the Pamohi school told Footprint that they love making the bricks and teaching the younger children how to make them. “I understand now that plastic is harmful to the environment and if we keep using plastic it will pollute the environment. We used to burn plastic for cooking purposes but as soon as I realised the harm we were doing to our Mother Nature, I made my family stop right away. We also try to make our friends and relatives aware about the harmful effects of using plastics,” he said.

Over 2,000 kilometres away in Dehradun, the capital city of the state of Uttarakhand, near the foothills of the Himalayas in northern India, the non-profit Waste Warriors have also been working with schools to address the plastic menace. The city generates around 30 million tonnes of plastic waste every day—a large part of it single use.

Uttarakhand is a popular tourist destination for its hill stations, wild life and pilgrim towns. In 2015, the government unsuccessfully tried to ban single-use plastic. Faced with the growing prospect of a waste explosion, the Waste Warriors—backed by the UNDP and Coca Cola—is currently piloting a project in two popular tourist hubs at the foot of the Himalayas, Dehradun and Dharamshala, where they have installed plastic gullaks or piggy banks.

Six of these plastic piggy banks are in three schools in Dehradun. Since 2019, these have collected 510.92 kilograms of plastic waste.

"Children collect and dump plastic waste in the piggy banks every day—once full, the nonprofit collects the waste for recycling"

“The concept behind this initiative is to save —not coins but plastic,” said Naveen Sadana, senior manager of outreach and partnerships of Waste Warriors. “We want children to see plastic not as waste but as a resource.”

Children collect and dump plastic waste in the piggy banks every day—once full, the nonprofit collects the waste for recycling. The school’s eco club then gets a small donation in exchange for the plastic waste. The students of one of the schools—an institute for deaf children—used the money to buy and donate woollen socks to poor families in the neighbourhood.

“Children understand environmental challenges better. They are eager to learn and implement what they learn. And most importantly, what they learn, they teach it to their family members. Through them we can reach a larger community of people,” Sadana said.

The Akshar foundation now has over 100 students. They are working with a government school in New Delhi and elsewhere, hoping to train many more children to come up with sustainable innovations and solutions.

The Padampani school, too, is looking at various ways in which they could implement their model elsewhere. “The pandemic has forced us to pause, but as soon as we are able to resume, we will be looking to involve more government schools in the project,” said Rakesh Ranjan Somdarshi, coordinator of the school. “Our school has around 300 students. Just imagine if this could be implemented in all schools in India, what a change that will bring”

Photo by Mike Fox on Unsplash

What can fashion learn from food in the fight against climate change? The rise and fall of South Africa’s super plant
Previous post
Next post