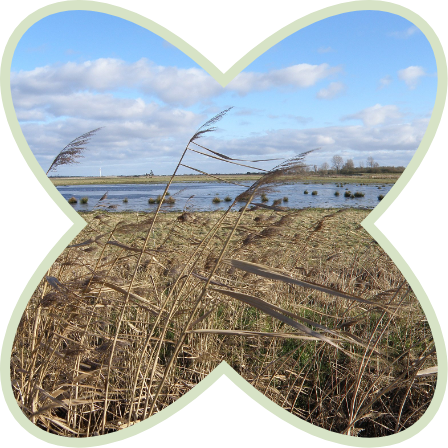 Stretching across the eastern bump of Britain, the Fenlands is a large low-lying coastal plain that encompasses parts of Lincolnshire, Cambridgeshire, and Norfolk. Over 500 years ago, the Fens were a wild, wet marshy area, underpinned by peat—a muddy accumulation of partially decayed vegetation and organic matter that serves as a vast terrestrial carbon store. Extensive drainage programmes in the seventeenth century sought to grow valuable dryland crops on top of the peat-rich soil. Although still very productive, the local environment changed as a result. Over the centuries, the peat has dried out, releasing the ancient carbon into the atmosphere.

“The price has been the largest soil carbon emissions of any form of land use, massive ground subsidence resulting in ever-increasing costs to reduce flood risk, and the steady loss through oxidation of the very soil that the Grade 1 agricultural land is based on,” points out Richard Lindsay, of the University of East London and the Water Works Project.

This creates a major problem for farmers. Although it covers less than 4% of England’s farmed area, the Fens produces more than 7% of England’s total agricultural production and is home to 13,000 different animal and plant species. As Brian Finnerty of the National Farmers Union (NFU) points out, “the challenge is how to ensure farmers continue growing high quality produce while mitigating the impact of climate change and contributing towards the NFU’s target of zero carbon emissions for agriculture by 2040."

To fix this, plans are being made to create a Great Fen Biosphere with UNESCO status, ‘bringing people, nature and science together to promote innovative, sustainable solutions to future-proof the fens.’ Such a designation would place the area on a global map of ‘special places’, focusing attention on building resilience across all aspects of the communities, economy and environment of the Fens.

Paludiculture [puh-loo-dee-culture]—wet agriculture and peat forestry—is set to play a major part in that transformation, recreating valuable farmland, keeping the carbon in the soil and providing valuable information for other communities worldwide. As Richard Lindsay says, “paludiculture is providing a template for a new style of agriculture. The UN Food & Agriculture Organisation is promoting it as a vitally needed approach to the sustainable management of peat soils, offering an opportunity for the farming community to continue producing valued crops from the land, but in such a way as to be sustainable.”

One of the most innovative changes is the £1m Water Works project, funded by the People’s Postcode Lottery that is currently transforming a 12-acre area of the Great Fen in Cambridgeshire. There, water levels are being allowed to rise, creating a renewed wetland habitat. Into these, volunteers have been planting large-scale trial beds to demonstrate the type of crops that could be commercially viable.

The Water Works project forms part of a wider Great Fen project designed to re-wet 3,700 hectares of peat across Cambridgeshire linking national nature reserves, and acquiring farms within the area. It is one of the largest restoration projects in Europe and when complete will totally transform a landscape, which for centuries has been dominated by cereal growing.

Farmers are being encouraged to visit the site to study the potential opportunities. Kate Carver, Great Fen project manager, is also targeting chefs and gin companies who could potentially use the unique botanicals being grown in the fen.

Planting began with large quantities of bulrush and reed so as to filter the incoming water, cleaning it before it feeds the harvesting crops. The reeds can then be used for thatching or turned into silicon for use in lithium batteries, while the bulrush can be used for bioenergy, as animal fodder or in the creation of insulation materials.

After the reed and bulrush, the volunteers planted sweet grass (a wild grain suitable as a cereal crop), watercress, wild celery, hemp agrimony, meadowsweet (a herb) and bog myrtle (a flower) together with plants possessing medicinal potentials like comfrey and yellow flag iris.

In the spring, a further crop will be added in the form of sphagnum moss, which will help with the restoration of the peatland. The moss is a valuable and versatile crop as it can be used in wound dressings, food wraps and nappies. At present, almost all the sphagnum moss used in Europe is airlifted in from New Zealand and China, so creating a homegrown crop would be significantly more sustainable.

Among the hundreds of volunteers involved was a team from Natural England West Anglia. They said, “this innovative approach aims to demonstrate the multiple environmental and carbon benefits of new farming systems in the fens.”

Returning the land to nature

The flexible farming offered by paludiculture is very much in tune with the environment, rather than the sort of destructive monoculture that has blighted so many ecosystems around the world. Joyfully, wildlife such as badgers and snipe are already returning to the fen.

Lorna Parker, Great Fen Restoration manager says: “We will be working with the carbon monitoring teams to track the effect these crops start having on CO2 flux measurements. Paludiculture is an exciting prospect for future land use. It offers so many potential benefits and would be a truly sustainable system that could transform farming on peat soils.”