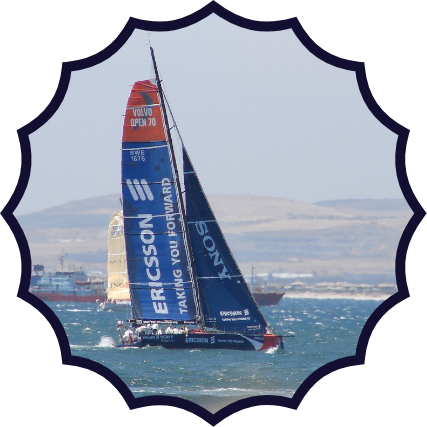 A summit for ocean health

“If Mother Nature has invoked Covid-19 to send us all to our rooms to think about what we’ve done, then we need to come up with better plans and new approaches.”

Wendy Schmidt, sailor and philanthropist, summed up the mood of the virtual room at the end of the latest Ocean Race Summit, where more than 500 delegates came together to discuss the latest developments in the technology and co-operation surrounding ocean health and sustainability.

It began as a one-off event during a round-the-world yacht race in 2015, when the contest’s organisers decided to hold a conversation about climate change and its effect on the international waters that all those involved use as their racecourse.

Originally called the Whitbread Round-the-World Race, The Ocean Race is considered to be one of the toughest tests in team sports; a race to circumnavigate the globe which has been held every three or four years since 1973.

Although the next edition isn’t due to happen until October 2022, the organisers have expanded that one-off event into a series of summits aiming “to bring together a diverse group of top experts across many fields and disciplines who can work collaboratively to develop and share effective solutions to restore ocean health.”  Coronavirus restrictions meant that the latest summit was held online, but that made it easier for attendees—more than 500 of them from all around the world—to join in with the debates.

Participants in the Ocean Race already contribute to the global knowledge base on ocean health. For many years their yachts have carried sensors which collect data on water temperature, pH and salinity while they race, giving marine biologists access to data from some of the most remote places on Earth.

Today all boats take part in that effort. “Gathering science data is one of the three pillars to sustainability for the Ocean Race,” said Richard Brisius, the race chairman. “We’re also making people aware of the problems of plastics in the ocean, and engaging in educational programmes, especially for young sailors.”

As well as the data collected during the races, crews are now helping to deploy floating buoy sensors which transmit data back to institutes such as the US National Oceanic and Atmospheric Administration (NOAA), to help scientists track real-time changes to water conditions.

The summit heard that the number of fish in our oceans has been cut by half since 1973, when there was only one per cent of the plastic pollution that there is today. Getting ocean health back to the standards seen when the Ocean Race was first staged is one of the organisers' driving missions.

Sailors themselves have also reported significant changes in their own observations since that first race: “When you take a big step back and talk to people that were there 50 years ago, the difference to where we are now is pretty scary,” said Peter Burling, skipper of the Emirates Team New Zealand, and founder of the Live Ocean charitable trust. “It shows you how urgent this issue is, the ocean does so much for us, it creates so much of the oxygen and absorbs so much of the heat, and we really need to look after it,” he said.

“I’ve been fortunate enough to sail around the world a couple of times. The first time I did that was a real awakening, for me personally, to the problems that our oceans are facing, specifically around the issue of marine debris. The second time ... it was getting more in-depth and educating ourselves about the issues that do exist,” said Charlie Enright, skipper and co-founder of the 11th hour racing team who is planning his third round-the-world trip. “We’re trying to focus on solutions to the problems that we’ve discovered in the past.”

“You can’t have infinite growth on a finite planet.”

Many of the discussions focussed on the use of technology as a way to learn more about ocean health, as well as taking steps to maintain it. Some of the ‘Blue Tech’ projects highlighted included a marine trash skimmer which collects floating plastic waste, aquatic robots which can map icebergs and others which can track whale populations so that commercial activities can be paused when whales move into an area of the ocean with active fishing fleets. Other reports looked at buoys which drift below the surface and collect data on water conditions over time before resurfacing and transmitting their data automatically, and 3D-printed cameras which can be deployed underwater to monitor marine communities.

“There’s this rush for things more affordable and easier to fabricate. We’re able to make ocean technology, things that are rugged and can survive the pressure and all the other harsh conditions of the ocean in much better ways than we used to ... and that’s going to benefit everybody on the planet,” said Brennan Philips of the University of Rhode Island.

“There’s blue tech that promotes sustainability, wind power, offshore wind farms are a really good example of that, but we have to remember that the ocean is a finite space and all the industrial activities that go on in it have an impact,” Dr Mark Baumgartner of the Woods Hole Oceanographic Institute added. “The challenge of blue tech is finding a balance between being sustainable and helping humanity, and that’s a tricky one.”

The summit also heard from groups who are developing collaborative projects to preserve marine ecosystems, and create sustainable economic use of the oceans. Jennifer Chapman of Blue Ventures highlighted how they worked with one village in Madagascar to tackle over-fishing: “Instead of taking a top-down approach, Blue Ventures worked with community leaders to identify a solution that worked and that fit with their current context, which was basically a very small area of reef, that was closed just for octopus and only for a short period of time. Octopus grow very quickly so this led to an enormous increase in catch and such success really spread like wildfire, gossip, all up the coastline. It has since been replicated hundreds of times.”

While local projects can find some solutions, the bigger picture is still bleak. “You can’t have infinite growth on a finite planet,” said Michelle Bender of the Earth Law Center. “We need a new framework that is essential to respect our relationship with nature. With an ecocentric approach, we now base the management of our activities on the benefits to, and the needs of, the ecosystem as a whole, with humans as a part of that.”

However, she says this is easier at a local level and that they still face resistance from larger scale commercial operations such as fishing, seabed mining, and offshore drilling. “There’s this false assumption that the rights of nature automatically means they’re going to lose profit, and it's the same with human rights, and that’s not necessarily the case. So we may look at banning seabed mining, but then we’re seeing transition to the use of alternative and renewable resources.”

"We have to remember that the ocean is a finite space and all the industrial activities that go on in it have an impact."

The frustration surrounding the lack of corporate and political will to take action was echoed by senator Sheldon Whitehouse: “We have to continue to bring pressure on the fossil fuel industry to stop its political mischief ... they run political operations dedicated to stopping Congress from doing anything serious on climate – they’ve got to knock it off.”

However, the Rhode Island democrat felt there was also more that the wider business community could be doing as well: “They may take it seriously on their websites, they may take it seriously internally in their own sustainability policies, but when it comes to Congress, they are absent, absent without leave. It’s really disgraceful how little effort corporate America puts into Congress on this issue."

"We have to change our mindset, to be caretakers of the oceans. We actually are damaging them now in ways that will be enormously painful for our children and grandchildren, so the taker-caretaker shift, and a good solid boot in the rear end for corporate power, I think, are two ways that we can really, really help.”