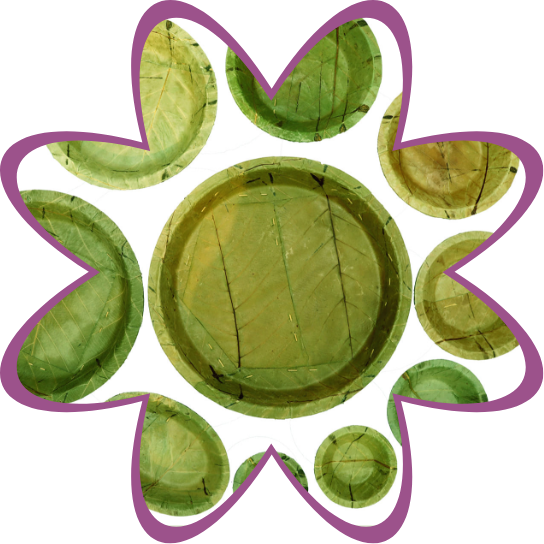 Tapari and the traditions that can fuel a sustainable transition

It’s a calm wintery noon in central Nepal. There's a clear sky and warm atmosphere. It's perfect for a little nap. But Mrs Sita Lamichhane, our neighbour next door, is working diligently. On her own, she is making Tapari, a traditional plate made out of the leaves of Sal plant (Shorea robusta) that is used to serve food during festivals and to pledge offerings for gods and goddesses on religious occasions.

I can see how eloquently she makes the plate—placing one leaf over the other, just around the border, and piercing the overlapped leaves through a fine bamboo stick. She curves the stick within a few inches, pierces it again, gets to the other side, breaks the stick to end with a nut. It holds two leaves in one spot. But she needs to seal eight more.

"How do you bring such zeal in making tapari, Sita vauju*?" I ask her with sarcasm. (vauju means sister in law)

"I have finished household chores already. A nap surely makes me lousy and I am desperate to get over these tapari. You see, father in law’s shraddha (annual death ceremony) is just around the corner, and there is not a single tapari left in the house."

There were hundreds of sal leaves lined up on her mat (Gundri). In mere minutes she had already called out to all her sweethearts of the village. First a granny joined her, then my mom, then an elder aunt, then her sister in law, and a few others. Within 20 minutes, there were ten women, all gathered for Mrs Lamichhane’s tapari. Was it unusual? Of Course not. On any occasion, big or small, elderly women of the community gather up and make tapari.

For them, tapari is not just a leaf plate but an occasion of celebration. It's their time to laugh and gossip together. For those new to the practice, it's time to learn the craft. My mom always complains a lot if she ever misses the tapari-making.

It’s tough for nations like Nepal to invest in high-tech and advanced sustainable technologies. We lack the knowledge, skill sets, and above all—the finance. But sustainability doesn’t have to be only about advanced technology. It can be as simple as adopting a culture that could benefit human society keeping a minimal impact upon nature.

Back in the old times, tapari was essentially a lifestyle for the Nepalese. Govinda Bolakhe, 75, a grandpa from my village, remembers his marriage of 1961. His family needed to carry big cans full of foodstuff and equally big buckets (Doko) full of tapari to the bride’s (Grandma's) home. They needed to deliver a party and those tapari were the party plates. There were certainly no plastic plates back then. The used tapari plates, if still in good shape, could then be reused; if not—left to rot safely at the composting site.

Comparing it to the modern times, we do now have easily available plastic plates. But folks at my village continue making tapari not because they feel empowered to tackle plastic pollution but because this tradition is rooted deep in our culture.

In fact, the elderly members of my community seem intrigued that such a normal practice could be seen as innovative and especially sustainable.

One may rightly wonder whether we can rely on ancient technologies to tackle contemporary issues like plastic pollution and environmental degradation?

I think we can. Let me put forward my logic here. In Nepalese society, cultures are habits: a regular behaviour which a majority of people practice. It's easy to carry it forward when everyone is on the same page. But to truly match up the modern needs, yes, we may have to restructure and reprogram our cultures and habits. But the bedrock is often already there.

The new age of tapari

“It started as a family business for the regional customers and I thought, ‘why not expand it?”" said Basudev Giri who manages Indradev Tapari Udhyog in Nawalparasi, Nepal. His company now produces machine-based lite, reusable, leakage-proof, and modernised tapari. During our brief conversation, Giri explained that it was his father who gave him the motivation to run this unique industry. Obviously, there were big bumps along the way but in the last decade his products have reached the international market.

"There aren’t big investments in this field so adaptation as per the market need is a big pressure", he says. Nonetheless, Giri proudly employs more than 50 women, mostly from marginalised communities. Who had thought that tapari could transform lives?

Unlike tapari, plastic is not so easy to get rid of. Throwing it away pollutes the environment and burning it releases harmful greenhouse gases. Our rivers are filled with plastic, our landscapes and forests completely littered. Though big corporations like Carbios are on a mission to develop bacteria-based plastic recycling plants, this still looks a far-fetched project of the future. Any clean-up campaign feels like a temporary solution. So it comes down to us, doesn’t it? We need to change our ways.

Making a tapari is resource efficient. People collect mature sal leaves that sit in the lower portion of the trees, sometimes collecting the fallen leaves as well. When crafted well, a tapari can be used and reused again and again.

Such a multipurpose organic product impressed Leo Thomas Lewton, a young tapari dealer based in Britain. He became fascinated by the tapari's design, associated culture and its mass-use after a trip to Nepal. "The interest towards organic products is steeply rising in recent times but we need to scale up the quality and quantity in the same regards", Leo said. People shouldn’t buy the product just out of environmental sympathy, it also has to fundamentally satisfy them.

Another entrepreneur, Hari Dahal, co-founder at Leafplus, took a different tapari-inspired approach. His company produces fallen areca leaves based-products. A sustainability practitioner and an entrepreneur, he is realistic about what individual products can achieve. “If we truly want change, then we have to commit”, he says. It has to “fundamentally come from policy level."

But on the ground, sustainable habits carry on strong. In my hometown, in central Nepal, folks still gather to make tapari. We feel proud that on another continent the culture has been restructured to meet the modern needs. During our next community ‘tapari sitting’, I will be attempting to design my first tapari. Wish me luck.