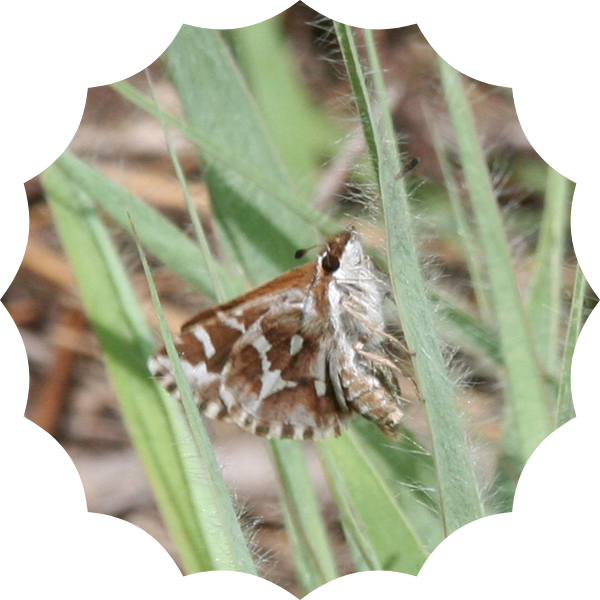 On the scrubby, coastal flats of the False Bay Nature Reserve, at the foot of the famous Table Mountain in Cape Town, South Africa, are found sporadic, isolated patches of imperata cylindrica grass in the dune seeps. It is commonly known as cotton wool-, or sword grass, and it likes to have its feet wet. It is the only plant capable of sustaining a tiny, spotty, dull-brown butterfly, which was first identified in 1944, but had not been conclusively studied until seventy years later. By the time a first systematic survey was eventually concluded in 2016, it would no longer be ignored. That study estimated a mere 25 to 40 adults specimens were left in the wild: The Barber’s Cape Flats Ranger was one of the most critically endangered butterflies in the world.

Skipper on the sword

According to the South African National Biodiversity Institute, Kedestes barberae bunta is entirely endemic to an area of roughly 15 square kilometres along the city’s southern coastline, on an undulating, sandy plains-region known as the Cape Flats, with individuals having a range of no more than one square kilometre. Females lay their eggs exclusively on the sword grass, which is the only type of plant the caterpillars are able to consume, and once hatched these caterpillars crawl to the very tip of the blade, which they enclose around themselves with a silk-like substance to create a nest of sorts.

As a member of the Hesperiidae family of ‘skipper’ butterflies, it’s neither exactly a butterfly however, nor entirely a moth, but instead something in between. "With butterflies," says conservationist Ismat Adams, "the charismatic species, the ones that are really beautiful, they get the most research because people are more drawn to them. Barber’s Cape Flats Ranger, on the other hand, is not particularly striking, so it just didn’t receive a lot of attention for a very long time. It’s also really small, with a wing span of around an inch to inch-and-half, which is about the same as from the tip of your finger nail to the first knuckle. If you don’t know where to look for them, are not very used to them or don’t recognise their movements, you wouldn’t even know they were there."

When Adams was appointed as an intern field ranger at the False Bay Nature Reserve in 2014, he was assigned the duty to formulate a monitoring programme for the reserve’s endangered butterflies, which also included the False Bay Unique Ranger, or Kedestes lenis lenis ."Lepidopterists and conservationists knew the butterflies were rare, and where they were more or less," continues Adams, "but no-one knew exactly how rare, and the City didn’t really know what to do with them." Through developing the monitoring programme, Adams’s interest in the skippers grew, until he eventually parlayed his programme into a Master’s thesis, an extensive study of the life-cycle and habitat of the Barber’s Cape Flats Ranger. This study was also the first to do a scientific population count, and thus the first to quantify exactly how endangered it was.

In response to this pioneering work, the Cape Town Environmental Education Trust (or CTEET) founded the Kedestes Conservation Project in 2017, in partnership with the City of Cape Town and various related stakeholders. Some of the Project’s main tasks were to include yearly population trend surveys during the flying seasons of September and November, along with identifying previously unknown habitat patches.  It also established a ‘captive rearing’ programme which, among others, hand-feeds pregnant females with honey-soaked earbuds, to strengthen them during their reproductive cycle. At its inception, it was one of only two such initiatives in the world, and is a labour-intensive process that Project Manager Louise Baldwin describes as a "long-term, first class, babysitting service."

But a small team can only hand-feed so many female butterflies in a season, and according to Baldwin, the Project’s most important work, and the best hope of a sustainable and growing butterfly population, is habitat restoration and vegetation recovery, through the removal of invasive species and encouraging the return of the wetlands where the imperata cylindrica grows.

These False Bay wetlands are characteristic of a type of vegetation known as Cape Flats Dune Strandveld, which is one of a constellation of nineteen ecologically singular vegetation units found within the City of Cape Town, considered one of the world’s ‘hottest’ bio-diversity hotspots. Due to prolonged droughts, changes in natural fire patterns, bush encroachment and rapid urban expansion, all of these vegetation units are considered at least partially or severely degraded.

According to Dalton Gibbs, a bio-diversity manager with the City and one of the co-founders of CTEET, the Kedestes Project’s habitat restoration work is a crucial part of a multi-faceted effort to conserve what remains of the Cape’s endemic vegetation. Another CTEET initiative, the Gantouw Project, recently re-introduced eland, the largest antelope in the world, to the Cape Flats for the first time in over two hundred years in an effort to push back against the same bush encroachment that also threatens the habitat of the Cape Flats Ranger, along with many other endemic species.

Gibbs is philosophical when asked about the purpose of conserving flowers and butterflies, in the face of the ever-growing demand for living space in a rapidly-growing city. "If you destroy everything of value in a natural space," he says, "your connection to that landscape becomes questionable. You have to have a connection to the landscape. On the Cape Flats, that landscape just happens to be Strandveld".