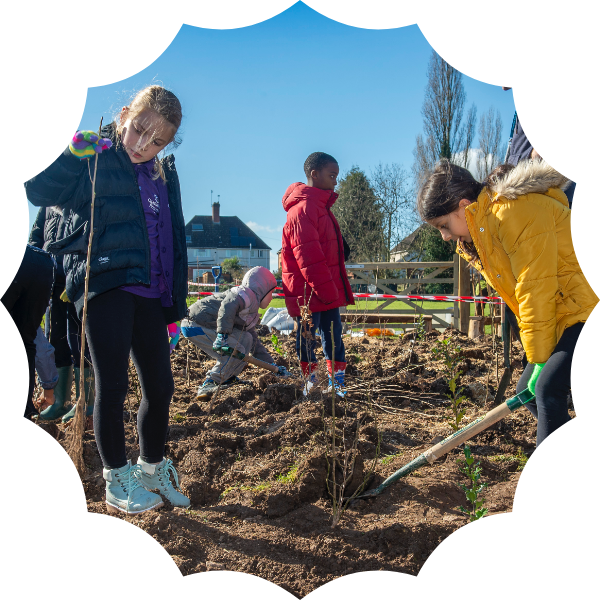 A refuge for the mind: planting tiny forests

“Might I,” quavered Mary, “might I have a bit of earth? To plant seeds in—to make things grow—to see them come alive…” — The Secret Garden (Frances Hodgson Burnett)

Sometimes the smallest things can make the biggest difference.

It is easy to feel overwhelmed by the big picture of impending climate catastrophe, to despair at the scale of change needed and feel ineffective in our small-ness. It can help to turn to nature to remind ourselves just how powerful the micro can be.

The first plants formed from tiny algal spores, floating off rivers and taking root in marshy mycelial networks. Lichens, another magical algal-fungi interaction, thrive in earth’s most extreme environments—arctic tundra, toxic slag heaps, bare mountain rock. Tardigrades, the microscopic pioneer species at home in lichens, tolerate radiation, dehydration and outer space. Insects lay the biological foundation for all other terrestrial ecosystems. And let’s not forget about the small wonders that are bees.

Now, it is tiny spaces that are being placed under the microscope. In the urban landscape, with the green so often crowded out by the grey, one micro-habitat allows us to shoehorn nature back in: the Tiny Forest.

Forests where the gods dwell

The brainchild of Japanese botanist Akira Miyawaki in the 1970s, Tiny Forests have transformed neglected pockets of land across the world. Tennis court-sized patches of towns, ports and factories are crammed with 600 native saplings, spaced randomly to mimic the natural growth of wild woodland. A morning’s work can produce astounding results.

Miyawaki recognised the restorative properties of the ancient forest. As a young ecologist, he stalked the country, tireless in his hunt for Japan’s few remaining indigenous woodlands. He found what he sought near temples and shrines: the Chinju no Mori sacred groves, or Forests where the gods dwell. These vibrant untouched areas, imbued with mysticism, preserved “forests that have remained from the ancient age of myths to the present time.”

Miyawaki single-handedly mapped 10,000 woodland sites, built a bank of 10 million seeds and resurrected thousands of parcels of native forest. In the face of scepticism he demonstrated that, with the right soil, saplings and companion organisms, fertility and wildlife could return to even the most degraded of areas. His new forests stabilise land, mitigate tsunamis, and protect water sources. They supply beauty, beasts, food, firewood and sanctuary.

They also counteract the more harmful impacts of industry. Miwayaki’s forest at a Toyota factory in India was designed to offset carbon; it also sparked the worldwide Tiny Forest movement. Engineer Shubhendu Sharma put Miyawaki’s methods to the test at home and was awed by the emergence of his own urban wilderness. He set out to develop Tiny Forests for a temperate climate. Swathes of pocket woodlands have since sprung up across Europe, transforming Dutch cities, French motorways, Belgian tenements and German farmland.

The UK is the latest to fall for Tiny Forests. A planting this year, in a suburban area of Bristol, England, was born from dreams of nature restoration. Organiser Clarie Miles explains: “It was a realisation that I can’t buy 100 acres of Welsh hillside but I have a little neglected streamway near my house. What would it mean—to ‘rewild’ that?”

Clarie was keen to encourage the creep of nature over the concrete: “Urban rewilding is where I’ve come to. I’m never going to get bison or beavers here. But we can create an environment where humans are part of that ecosystem. We have to be the bison and cattle grazing the ground, and put in the leaky dams ourselves.”

“British native trees evolved around animals like bison and elephants—to be broken, chewed up and stamped on, and to grow despite that. I don’t have bison, but I have teenagers! If some of the trees get a bit smashed, that’s part of the ecosystem - they’re just doing one of the jobs for me!”

She’s happy to sacrifice a few trees to bring the benefits of the wilds to residents. “We’ve brought a bit of land back into use,” says Clarie; “We’re making it a place where people want to go, to hear birds and insects, and experience what it is to be in nature.”

A refuge for the mind

Tiny Forests can rewild the most urban of environments, transforming anything from an abandoned car park to a neglected house plot. They’re a literal breath of fresh air amidst all the smog and fumes. Healthy soils retain nutrients and sequester carbon—120 kgs/year on average in the first five years of each Tiny Forest’s life. This can increase to 250 kgs annually as the trees reach maturation. Trees also reduce city temperatures and flash flooding. The dense undergrowth of a Tiny Forest can attract over 500 plant and animal species within just 3 years.

They also offer a rare chance for urban children to forge a relationship with the natural world, and to develop compassion and care for the environment.

In the Netherlands—one of the world’s most densely populated countries—10,000 young Tiny Forest Rangers have been trained so far, these children plant the forests and then use it as an outdoor classroom. Daan Bleichrodt, Tree Planting Officer at nature education organisation IVN, believes “we can reconnect an entire generation of kids that grow up in cities devoid of green to the healing effects of nature.”

“Nature acts as a refuge for the mind,” says researcher Mark Mieras. Indeed, Daan is experimenting with Shinrin-Yoku, or forest bathing. “It’s a powerful way to immerse yourself in nature, discover its healing properties and relax,” he says.

Perhaps it’s the call of the wild, or a yearning to connect with the gods of the native groves; either way dense undergrowth can be a place of imagination, magic and mystery.

Give forest bathing a try: stop, listen and see what the forest has to tell you.

In this time of screens and solitude, escape the four walls and let your mind run wild in the woods with treefm.