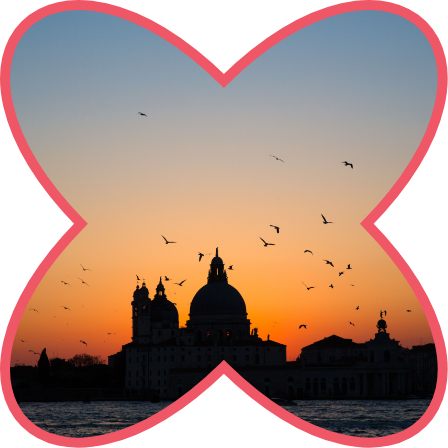 Once a feat of human ingenuity, the fragile environment is now at risk | By Rebecca Ann Hughes

Andrea Rossi has been fishing professionally in the Venetian Lagoon since the age of 15. “I wouldn’t have believed how the lagoon would change in just 30 years,” he says. The island of Venice is protected and nourished by the surrounding lagoon. But today, human activity is posing a serious risk to this fragile environment, which in turn endangers the city’s inhabitants.

The city of Venice in northern Italy is one of a profusion of islands scattered around a shallow bay in the Adriatic sea. This bay, or lagoon, is fed by both fresh and sea water resulting in a unique environment of narrow canals, swamps, marshes and sandbanks. “Venice and the lagoon are different elements of a single interconnected system and the fate of either or both of them is inextricably connected to the other,” says Jane da Mosto, environmental scientist and founder of We Are Here Venice (WaHV), a non-profit association hoping to safeguard  Venice’s future.

The Venetian lagoon has undergone artificial alterations since the 15th century when rivers were rerouted to the north and south to prevent their sediment from silting up the lagoon. As da Mosto comments, “That’s the point that defined the fact that you can’t say the Venetian lagoon is natural. It’s the fruit of human ingenuity.” In recent decades, however, that ingenuity has been compromised.

Ecologically rich sandbanks, or Barene, are vital for the lagoon ecosystem and purify the toxins in the water. These delicate structures have slowly been eroding.  One culprit is the Canale dei Petroli, a shipping channel dug at the end of the 1960s that runs through the south of the lagoon. As large ships navigate this channel, the water movement sucks in the sediment on either side. When the channel is dredged, the sediment is not reused or replaced. “This has caused the whole of the central lagoon to lose its morphologically diversified structure with salt marsh, tidal creeks and winding channels,” explains da Mosto.

The northern lagoon has managed to maintain more barene, but these are now at risk from other kinds of boat traffic. Allison Zurfluh, a travel consultant specialising in the area, says, “Leisure boats and yachts, made for sea navigation, are coming into areas that are not permitted and the suction effect of their too powerful motors speeds up the erosion of the barene.” She describes how they sometimes moor up on the barene, using them as beaches, damaging the plant and animal life in the process, as well as leaving rubbish behind.

"The Venetian lagoon has undergone artificial alterations since the 15th century"

Rossi emphasises that the barene need protecting at all costs. “They can’t be created again artificially because they are hundreds of years old. Barene contain mud rich with organisms and algae which provides nutrients. All the elements work together and have grown together.”

Eco-tourism to the rescue?

Lagoon residents are turning to the opportunities offered by sustainable tourism in an attempt to stall the erosion of the barene, the ecosystem, and traditional lagoon life. Zurfluh, who includes many such activities in her travel experiences, is careful to clarify that sustainable tourism does not simply mean “tourism in nature”. Rather, “it means you explore and experience a place in a way that gives back more than you take from it.”

Domenico Rossi is a fisherman from Burano who runs “slow” boat tours in the northern lagoon. In a restored traditional boat, he takes visitors to areas rarely known outside the fishing trade and explains their ecological importance and how the lagoon environment has been damaged. No more than  12 people can go on each tour and he is firm about keeping numbers low. “If lots of people start to visit the areas where we take tours and we go fishing, it would mean we wouldn’t be able to fish there anymore and the destruction of the barene would be accelerated.”

Andrea Rossi has translated his passion for lagoon birdlife into a small birdwatching activity. From his hide on the island of Torcello, guests can observe native species like pheasants and falcons while reading about the history of the area. “I want visitors to understand the problems in the lagoon and how to protect it,” he says, “and I want people to respect its birds and nature.” Though their activities are small in scale, such projects provide examples to other tourism businesses of how to behave in natural and protected environments.

In addition to unsuitable boat traffic, the lagoon is at risk from the MOSE project, a series of mobile barriers built at the inlets of the lagoon to protect Venice from flooding. “Because of important political interests, the MOSE’s effect on the lagoon was ignored and now it has almost destroyed the morphology of the lagoon,” says Domenico Rossi. The barriers restrict the flow of water, creating faster currents which in turn rearrange the sediments.

“The salt marsh of the lagoon is up to 40 times more efficient at absorbing greenhouse gases than a typical forest,” Jane da Mosto

The fishermen’s frustration is twofold. They are saddened by  the damage caused to the habitats essential for their livelihoods, but also that their knowledge and expertise, honed through a lifetime of navigating the territory, was not deemed worthy of consultation.

Da Mosto sees the MOSE project as part of a bigger problem with the way Venice and the lagoon are conceived of globally. “Think about it the natural capital of the lagoon. According to our preliminary research it is incredibly valuable, and has enormous potential to provide revenues and jobs for the city and its residents.”

"Venice can save the world."

We Are Here Venice has been exploring the lagoon’s capacity as a carbon sink. “The salt marsh of the lagoon is up to 40 times more efficient at absorbing greenhouse gases than a typical forest,” explains da Mosto. “We’re trying to build the case for the Venetian lagoon to be a place where investment in offsetting projects can take place.” This means that global companies could invest in their carbon emissions being offset in the lagoon.

For da Mosto, this is an example of the global importance of safeguarding the lagoon. “Instead of talking about the world needing to save Venice, we’re saying Venice can save the world.”

We Are Here Venice relies on donations to fund their work advocating the safeguarding of Venice and evidence-based approaches to policy making. Please contact gabriella@weareherevenice.org if you would like to make a donation or use the donation page on their website.

Photo by Luca Micheli on Unsplash