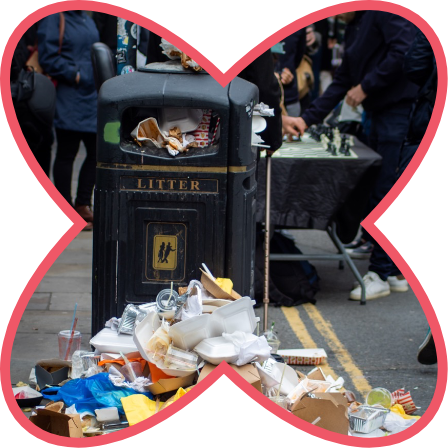 The UK's food waste is an income issue

Waste not, want not? | By Jonathan Taylor

Food waste is a complicated issue affecting the entire planet. In times of economic unrest, the dual threats of reduced access to groceries and rising prices loom large. So, with a second spike of Covid-19 cases and a potential no-deal Brexit on the horizon, what can be done in the UK to protect both people and planet?

According to a UN report in 2016, 8.4 million people in the UK are struggling to afford to eat, while the country’s food industry throws away 1.9 million tonnes every year, while households wasted around 4.5m tonnes of groceries that could have been eaten, at a cost of £14 billion. Despite Covid-19 lockdown measures leading to a significant reduction in household waste between March and June, it seems the UK is already reverting back to previous figures and the impact is as damaging to low income families as it is to the planet.

The registered sustainable waste management charity, Waste and Resources Action Programme (WRAP), is now publicising how self-reported waste has increased by 30% compared to the early stages of lockdown.

The reduction in food waste earlier this year shows how widespread actions really do positively impact sustainable progress. However, while the figures demonstrate what can be done to reduce environmental impact, lower income households — who are less likely to produce waste — are most likely to be impacted by rising prices.

“Low-income is not the sector which wastes, they simply cannot afford to,” explained Mary Mcgrath, CEO of the FoodCycle Network.  “People with a lot of money or expendable cash are more wasteful, it seems to make sense that those with wealth are thinking more about convenience over the environment. Sadly it seems consumerism has led to a feeling that it's OK to throw it away.”

Self-reported waste has increased by 30% compared to the early stages of lockdown.

FoodCycle offers people at risk of hunger, or loneliness, the opportunity to share a communal meal once a week by using surplus food from supermarkets. While there are many exemplary charities and initiatives like FoodCycle, which redistribute food surplus and waste from retail and businesses, household waste and its environmental and economical implications is a harder mountain to scale.

A number of politicians and industry experts, such as former Green Party leader Natalie Bennett, have pointed to the issue of poverty relating to food waste, including a need to buy cheap, ageing food, working long hours and paying expensive energy bills — in part generated by storing groceries safely.

The issue of food spoiling is being addressed to some extent by supermarkets and charities which use surplus food to provide meals for those in poverty, but as Foodcycle’s McGrath highlighted, the focus should be on encouraging the UK’s middle income populace to not only change wasteful behaviours for the environment but also in preparation for Brexit.

"Sadly it seems consumerism has led to a feeling that it's OK to throw it away," Mary McGrath - Foodcycle

When approached, WRAP was unable to provide data about ‘food waste in relation to social class’. In 2018 the number of people in poverty, despite living in a working family, hit a record high according to the Joseph Rowntree Foundation. Along with Brexit’s financial implications on the horizon, this makes it seem shortsighted to not be focused on social class.

Commenting on the potential of “no-deal” come January, FoodCycle’s Mary McGrath told us: “Every time you have a disruption you get an oversupply or undersupply of food, impacting consumer behaviour and pricing which then leads to difficulty for low income families. This is not simply in terms of waste but in particular with supply chains; it will be far harder on low income as either the food isn't there or the prices are unattainable as supermarkets see that they can push prices up when most people aren’t price sensitive, as we saw at the start of Covid-19.”

She added: “Brexit will create its own huge disruptions and it's definitely a concern for those already on the lower end of the income scale.”

Looking forward, it seems the focus on education is unanimous. FoodCycle and other charities cannot use household food waste in their efforts but McGrath believes that their work is helping to raise awareness and push for better education on the subject across all income levels.

“When our volunteers see huge tables laden with surplus food that makes them reflect on their own household behaviour and it's far more influential than anything they can read,” she said. “I met someone this week whose only hot meal is when they come to FoodCycle. When you start to add the human story to our food waste as a society, it becomes more impactful. We’ve noticed with people working with us there is a long-lasting and powerful change on individual's behaviour when it comes to food waste.”

In addition to working directly in the community McGrath is keen to put food waste on the educational syllabus. FoodCycle and other organisations such as Too Good To Go work with children to encourage more sustainable attitudes towards food waste from a young age: “We need to start focusing on schools. Children are great at educating their parents so starting it from a young age is vital not just in information but also so they don't have that fussiness we’ve inherited and feel they have to bin stuff!”

“When our volunteers see huge tables laden with surplus food that makes them reflect on their own household behaviour and it's far more influential than anything they can read,” - Mary McGrath - FoodCycle

Focusing on education, WRAP’s Love Food, Hate Waste initiative and their recently-launched Keep Crushing It campaign, which aims to normalise good behaviours picked up during this year’s pandemic, are aiming to create more understanding. They also aim to provide resources for food waste reduction across society. The campaign’s social media and online platform is already promoting ways to reduce food waste at home including by writing lists, optimising storage and freezing goods.

Peter Maddox, director of WRAP UK, said: “We’ve seen clearly how effective the Love Food Hate Waste messages and tools are – we need to reach more people to widen our impact. The more novel and innovative ways we find to engage with new audiences about this, the greater our chance of meeting the crucial target of halving wasted food by 2030.”