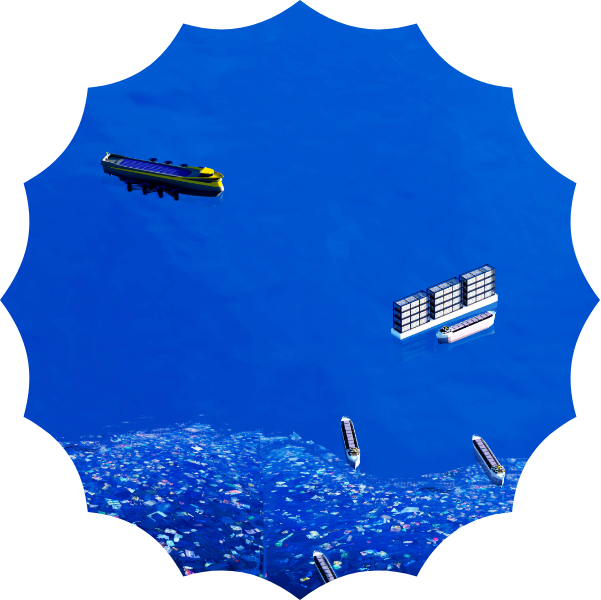 “Do you know there is enough plastic on the ocean surface that if you were to stack it up you can go to the moon and back, twice,” Haaziq Kazi, a class 9th student, explains like a seasoned environmentalist.

After all, he has been a TED speaker in India and abroad since the age of 11 when he developed his first prototype—ERVIS—a ship to collect plastics from the surface of the ocean.

Now 14 years old, Haaziq is concerned with plastic consumption which has only gone up during the pandemic due to massive use of personal protective equipment, gloves and other bio-medical wastes as well as the delivery of packaged items to households due to restrictions on commercial activities.

To make matters worse, recent cyclones ‘Taukate’ and ‘Yaas’ have left behind tonnes of garbage on India’s western and eastern coasts. Plastics make up a large amount of this trash and civic bodies are having a hard time clearing the beaches.

Plastics have become a severe transboundary threat to natural ecosystems and human health. Millions of marine animals including zooplanktons get severely injured or killed across the globe by consuming plastic and microplastics every year, from cattle to birds to marine organisms by ingesting plastics.

How will the Scavenger Ship Work?

ERVIS is a solar-driven eco-friendly scavenger ship prototype that aims to collect garbage from the ocean. It then segregates the plastics, oil and other garbage.

There is a waste collection compartment, which works on the concept of centripetal force, a multi-stage cleaner, which uses size-based separation to separate different sizes of waste, and a compactor that compresses the trash.

Saucers float on the sea surface moving in a circular motion to pull the wastes towards its centre. These saucers will also swallow up the waste via a central outlet, which is connected to various chambers in the ship.

“To help you visualize this, imagine a gigantic vacuum cleaner with many cleaning tubes attached to many dust bags. Once the waste enters the tube, it gets segregated,” explains Kazi.

The first sensor, which is an infrared sensor, alerts ERVIS for marine life. Any marine animals that are captured, are then poured back into the ocean.

The waste then goes to the first level—an oil filter, which collects waste oil and sends it to the oil chamber. We would like to treat this waste oil, either decompose it or store it for safe disposal.

The second, third, fourth & fifth chambers are for large, medium, small & micro waste respectively. Once the waste enters these chambers, then plastic is segregated from non-plastic items.

The plastic is compacted and stored in cubes. The other waste degraded with the help of bacteria or stored for separate disposal.

Finally, the now-clean water is returned to the ocean.

It's a big project with a considerable price-tag. "We have started crowdfunding and seeking to collaborate with individuals and NGOs but the pandemic has hampered the efforts," says Haaziq. "A few fellowships have also come by. However, I need millions of dollars to build a ship.”

The New York-based Schmidt Futures supports the world’s most talented people and seeks to empower them to solve the world’s pressing problems. The ocean competition-X-prize-offers $2 million prize money.

The origin of the idea

“I was 10 years-old and watching a documentary film on National Geographic Channel on plastic waste. I was shocked to know that a million birds and sea creatures die from consuming plastic when they don’t get anything else to eat. This had a huge impact on me,” Haaziq says.

But how was the ERVIS project born? “One day, I was washing my hands in the wash basin and saw the water going down the drain. Then, I collected some toys and took them to the bathtub, filled with water and opened their nozzles and I could see a whirlpool being created. I went to my room, drew a rough model, a circular ship with saucers attached; a very futuristic design, much like the USS Enterprise from Star Trek.”

Haaziq collected unused items from his home: an inflatable tube, connection pipes, cardboard and scissors to make his first-ever SHIP.

“This was just the first draft. The propellers weren’t automated and it only lasted seven seconds in water before coming apart. But there it was, my ERVIS, my vision of cleaning the oceans. I introduced it to my local TED ED chapter,” he says.

Haaziq was among 10 lucky participants shortlisted from among 10,000 videos the TED ED team had reviewed.

Awareness programs and a zero-waste marketplace

Haaziq is working on multiple platforms to make people aware of these facts and the urgency to reduce the plastic burden on earth.

He has created the ERVIS foundation and aligned it with UN SDG 14 goals. The foundation has prepared a curriculum and is working with schools to educate 1,500 children annually on the plastic problem. It has launched a zero-waste marketplace on Amazon to promote zero waste consumption products and is working with several organizations to bring environment innovators from across the country together.

The government-run Indian Institute of Technology, Bombay, has shown interest in his project and is looking into its technicalities at present.

“The idea of a scavenger ship is wonderful. Such citizen scientists need to be supported and given direction so that their concepts can be converted into reality. Institutions like IIT Bombay can provide hand holding platforms to such innovations,” says Shyam Asolekar, Professor of Environmental Science and Engineering at the Indian Institute of Technology, Bombay.

Dr Ash Pachauri, Secretary and Treasurer of the World Sustainable Development Forum, New York, also lauds Haaziq’s work: “Microplastics are hazardous not only for marine life and ecology but also for humans. On average, every person consumes an estimated 75,000 microplastics particles every year that are carcinogenic in nature. There is no single solution to end the plastic pollution. We will have to adopt multi-thronged approach. Skilling and supporting innovators like Haaziq, awareness among the public and bringing systemic changes to curb production and usage of single use plastic can help.”

All images courtesy of Haaziq Kazi