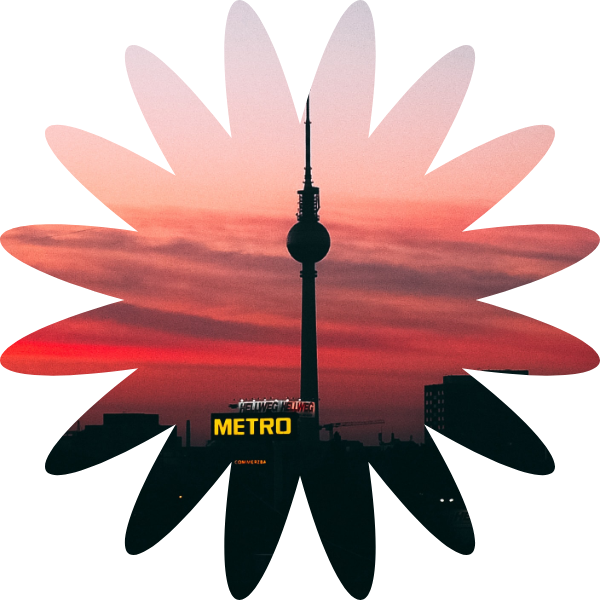 If campaigners are successful, Berlin will have the biggest car-free urban area in the world | By Leander Jones

It’s hard to imagine life without cars. Since the mid-20th century, the car has been one of the defining symbols of modern society, individual freedom, progress, and capitalism. Anti-car activism—though it has taken many forms over the years— remained for the most part on the fringes. But with global temperatures and environmental consciousness increasing year on year, anti-car sentiment is also on the rise.

In several cities across Europe, battles are being waged over street space.

In Madrid, a ban on cars in the city centre was overturned by the Spanish Supreme Court. In Barcelona, the mayor who introduced the idea of “Superblocks” to restrict through-traffic in many residential areas, was re-elected in 2020 on the promise of extending traffic restrictions throughout the city centre. The Mayor of Paris is building new cycle and pedestrian infrastructure on a number of central streets while shutting many off to cars altogether. In London, Sadiq Khan’s pop-up cycle lanes and Low Traffic Neighbourhoods are now being challenged in the courts.

Berlin is a city renowned for its radicalism, and, in true form, activists from the Berlin Autofrei campaign are taking things one step further. They are demanding a complete ban on private automobile use in the 88km2 area within the S-bahn ring—a train line that circles much of the city’s urban area. If they succeed, it will be the largest car-free urban area in the world.

There will be a few exemptions to the ban (e.g commercial vehicles, and for those who are mobility impaired) but the majority of people will only be permitted to take a maximum of twelve journeys in a rented vehicle per year to cover occasions such as moving house or large shopping trips.

Isn’t banning cars too radical? “Not when you consider the urgency of the situation,” contends Nik Kaestner, a 45-year-old sustainability consultant and campaign member, “The constitutional court has just ruled that the Government is not doing enough to address carbon emissions,” he says, referring to a recent verdict in April in a case brought by young environmental activists. Electric cars might be considered a lesser evil by some anti-car activists, but the pace of the e-driving roll-out is yet to step up a gear. “If you look at the data, half of Germany’s cars would need to go electric next year in order to meet the government’s own targets for transport. That clearly isn’t going to happen—currently only around 1.3% of vehicles are electric. So we have to reduce the amount of driving that's happening, not just change how we drive.”

Cities for people, not cars

For many in the movement it’s as much about the immediate environment as it is about the environment at large. For Nina Noblé, one of the campaign’s founders, the main issue is the “insane and disproportionate space we give cars.” According to a Flächengerechtigkeitsbericht commissioned by the Berlin Senat, 58 percent of traffic space is devoted to cars, although they only account for 17 percent of all journeys within the ring. In comparison, only three percent of space is devoted to bicycles, although they make up 18 percent of journeys. Then there are parked cars, which alone take up approximately 17km2 in the city. “Imagine what we could do with all that space,” Noblé wonders.

But how can such an ambitious proposal hope to succeed? There are plenty of fringe campaign groups with radical demands, but most of them are simply ignored. What makes Berlin Autofrei any different?

Germany is pretty special in that it has mechanisms of ‘direct’, as opposed to merely ‘representative’, democracy embedded in its constitution. One of these mechanisms, known as the Volksentscheid, allows citizens to initiate referendums if they receive enough support. In Berlin, these mechanisms have been used for a number of significant changes over the years, including most recently the creation of a Climate Citizens’ Assembly.

Of course, the Autofrei campaign may fail to collect enough signatures, or lose the referendum if it goes to a vote—but compromises and other policy moves are possible, especially if the Greens become the largest party in Berlin in September’s upcoming election.

Campaigners are nonetheless optimistic about their chances. “According to the signature collectors, more people are stopping to sign than walking past,” says Kaestner. He is confident they’ll get enough signatures for the first two stages, but “if it goes to the third stage—the referendum—it could become tight,” he admits. “We know that only a third of individual Berliners actually have a car, but that doesn’t mean people will automatically be in favour. If it does get to a final vote, it will be about motivating the base just like in every other tight election.”

Winning over the psyche

According to Potsdam University sustainability researcher Dirk Schneidemesser, “Berlin Autofrei is a smart approach, because you don’t have to find funding, or wait for building companies to go and build new blockades or cycle paths—you just have to restrict the use… So the implementation could go quite quickly.”

Nevertheless, he is cautious in his optimism, pointing to how embedded cars are within the German psyche. “I think that the knee-jerk reaction would be to oppose the ban. We've built a nation, and cities, that are so car-centric that it's just become normal, helped of course by the billions the car industry spends on advertising every year. Anything that deviates from this car-dominance we question initially. Driving out Das Auto im Kopf won’t be easy, but all the arguments are on their side. If they can get people to really consciously deal with this question, then I see good potential for success.”

Indeed, rather than any practical concerns, supplanting Das Auto im Kopf (the car in the head) may be the biggest challenge for the anti-car movement emerging across Europe. “With every city that has decided to restrict car use, from Amsterdam and Ghent in the ‘70s, until now, people thought the sky was going to fall. But it didn’t—in fact afterwards it always proves a resounding success,” explains Kaestner. Perhaps Berlin’s example will show the rest of Europe that change is possible and that getting rid of cars may in fact be exactly what the sky needs.

Lead photo by Zach Rowlandson on Unsplash, other images courtesy of Leander Jones