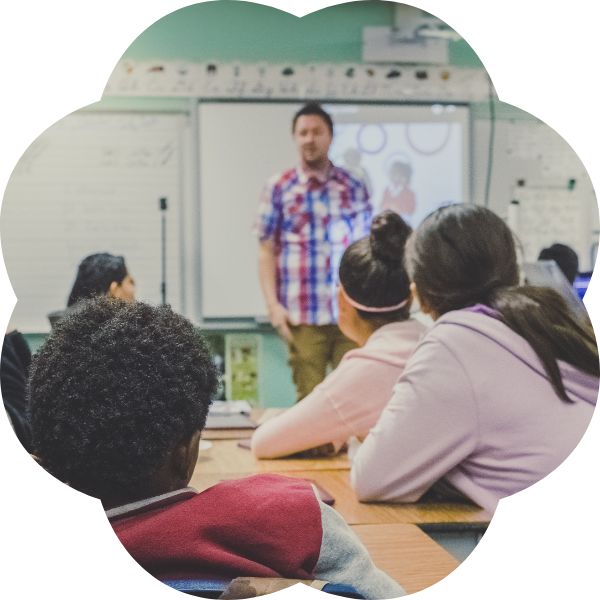 How do you teach the climate crisis?

"How many times would I need to fold it for it to be as thick as the earth?" asks Paul Turner, holding up a twice-folded piece of A4 paper. The answer is 37 folds—well below my tentative guess of 1000. Apparently, it’s normal for our brains to flunk a problem involving exponential increases.

For Turner, this is the primary problem facing climate education in the UK. "The climate emergency is not just a science problem," he says. "It’s a perception problem". As an ex-geography teacher and climate activist, he’s well versed in the struggle to teach the climate catastrophe’s mind-boggling scope in 35-minute lessons. "I could keep telling people facts, but if they’ve got no context, it’s completely meaningless".

Since 2019, young people across the UK have led the conversation on climate action. Snowballing school strikes spawned the Fridays for Future movement and student-led campaigns, such as Teach the Future, have broken through the national consciousness, calling for radical curriculum change.

It’s working: in 2019 the Labour Party manifesto vowed to make climate education a ‘core part’ of the curriculum and at this month’s Holyrood elections, the historic gains of the Scottish Greens came with a promise of further climate education. Meanwhile, Teach the Future’s petition to ramp up substantive education in the UK is brushing 25,000 signatures. But with the increased pressure from these demands comes uncertainty for teachers. How do you teach a subject you yourself might struggle to get your head around?

At face value, national curriculums across the UK offer provision for climate teaching. Scotland’s Vision 2030+ policy commitments lay out five strategic commitments to sustainable education, similarly replicated in the Welsh ESDGC. In England, the Department of Education curriculums provide core learning aims that are inclusive of climate change and, according to a Department of Education spokesperson, "teachers have the freedom to expand on [relevant topics] if they wish to do so". Currently, climate crisis issues are covered in science and geography at key stage three and four, although in the latter only science is compulsory. Primary school pupils are taught about how the environment can change as a result of human activity.

In practice, it’s more complex. Without established pathways or specialised training, teachers are left to set the depth of their focus and how they approach the teaching. Pressure is enormous; in a survey of 350 UK teachers, 75% said they felt they hadn’t received adequate training to educate students about climate change.

With 10 years of geography teaching under his belt, Turner knows the difficulties first-hand. The experience led him to write a free-to-access 14-step lesson plan in 2019. The ‘radical curriculum’ has been downloaded over 6000 times. Now an ex-teacher, his activism seeks to encourage bolder approaches, incorporating undisputable scientific consensus with teaching the development of critical thinking skills to understand and utilise raw knowledge.

For some activist teachers and students, that requires an end to the ‘siloing’ of climate education into geography and science lessons. "We see it as a golden thread weaving through the curriculum," says 16-year old Lily Henderson, a student staff member at the campaign. "I didn’t take geography as a subject when I chose my national five [the Scottish equivalent of GCSEs] and I haven’t done climate change since then. That’s four years when I haven’t touched the subject. Surely that’s a problem in our curriculum?"

"Students often find it difficult to make links between topics," a science teacher working at a state secondary school in the north-west of England told me, who wishes to remain anonymous. "Although the crisis may be covered across all three sciences, unless the links are explicitly made by the teacher, often students won’t make the link themselves. That leads to them knowing chunks of science, but not necessarily seeing the bigger picture".

Charity groups are working on alternative curriculums; Leeds Development Education Centre has developed subject frameworks to integrate climate education into KS1 to KS4 subjects, including modern foreign languages and maths. Integration becomes more difficult when students hit examination age, though. "Our assessments are 5 to 10 years out of date," says Turner. "They were written at a time when [this topic] wasn’t a priority.  At the moment teachers feel so much pressure to prepare for those examinations that it drives what they do in the classroom and how they teach. Climate change gets squeezed out".

His opinion is echoed by educators. "We are so pushed for time to cover all the content [of the curriculum] we need that topics can often be rushed," says the science teacher. "We miss out on vital time to discuss and dive deep into important concepts, like climate change".

The language of change

With one third of teachers reporting high levels of climate anxiety among their students, and 77% of students saying that thinking about climate change makes them anxious, demanding increased climate education toes a difficult line, where students can yo-yo between eco-anxiety and feelings of nihilism.

"It is terrifying," says Henderson. "I know many of my friends have experienced it. But being able to teach it in the correct way so that you don’t scare people and can also to make them aware of this issue and its solutions—that’s possible".

Turner sees changing the language teachers use as an easy step to addressing these fears. He suggests reframing the emergency as a current event, flipping the narrative from a passive learning experience into an active one.

That’s where the paper folding comes in—it’s difficult for our brains to grapple with vast figures and overwhelming facts, so grounding lessons in scalable examples diminishes feelings of panic or apathy in the face of monumental tasks. Turner’s lesson plan includes discussions on contemporary societal issues pupils might feel more comfortable with, such as meat-eating and uses of non-violent direct action. "The teaching needs to be empowering," he says. "It needs to be action-based and it needs to be about hope".

Alongside formal education, many UK schools are tackling the increased demand for climate education by offering off-curriculum eco committee activities, as well as committing to both certified and self-prescribed green initiatives. Eco-schools, run by Keep Britain Tidy, provides frameworks to instil simple, student-led environmental management systems at educational institutions, with a view to empower ‘young people to introduce and lead environmental actions and education’.

"A classroom is not in isolation, a classroom is part of society", says Turner. He sees schools as foundations to more radical change; a place to incubate ideas which will spread beyond the classroom. Previous homework for his students has included recording climate-focused chats with friends and family at home, teaching pupils to engage outside of the classroom bubble, in the hope they’ll be able to replicate the challenges reaching across partisan lines.

The concept works for sustainable behaviours, too. ‘Primary school pupils, in particular, are receptive to developing sustainable behaviours and thinking,’ says a teacher at a London independent primary school, who wished to remain anonymous. ‘They’re like sponges—everything you say, they take in. Key stage one and early years are important because you’re setting them up to make it a standardised thing".

For Turner, that turns the classroom into not just an education space, but an engine for radical change. "People often say that education is not the place to solve this—that it’s business or politics," says Turner. "But as a teacher, I know that schools are fundamental to the functioning of society. Schools have an ability to shift the rhetoric and to change the way that society thinks".

Photo by NeONBRAND on Unsplash

Saving the fishing cats Not even a thread goes to waste: from scraps to underwear
Previous post
Next post